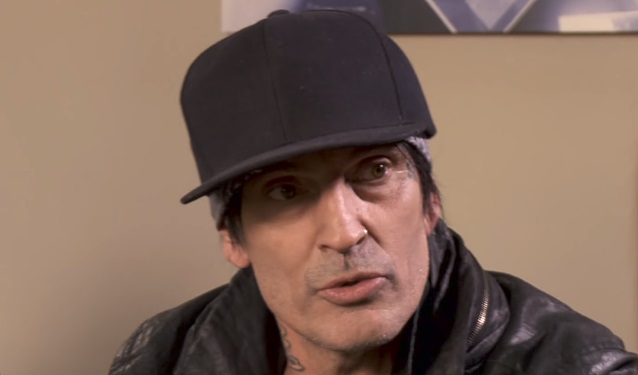 The Los Angeles district attorney has dismissed the criminal case against Brandon Lee because the MÖTLEY CRÜE drummer decided not to cooperate with authorities — even though it had previously been reported that he was pressing charges.

Brandon allegedly punched Tommy in the face in the musician's home while defending himself during a drunken brawl, but Lee disputed that account, tweeting: "My fiancée and I were in bed when my son busted into the room and assaulted me. I asked him to leave the house and he knocked me unconscious. He ran away from the police. THAT'S the truth."

The 55-year-old drummer posted a photo of his bloodied, swollen lip on Instagram, but later deleted the picture.

"My heart is broken. You can give your kids everything they could ever want in their entire lives and they can still turn against you," Lee captioned the photo.

Representatives for the Los Angeles County Sheriff's office, who arrived on the scene soon after the incident, previously told People magazine that Tommy and Brandon had been arguing about a series of tweets and photos Tommy had posted responding to a recent interview given by his former wife — and Brandon's mother — Pamela Anderson. During an appearance on Piers Morgan's morning show, Anderson recalled Lee's 1998 arrest for spousal battery, for which he pleaded no contest and spent six months in prison.