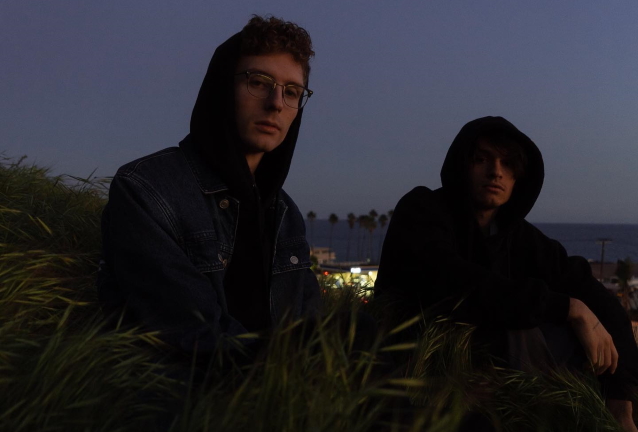 According to a press release, MIDNIGHT KIDS combines dreamy '80s synthwave, anthemic dance productions reminiscent of artists like AVICII and THE CHAINSMOKERS with a touch of indie energy and fantasias similar to PASSION PIT.

MIDNIGHT KIDS previously issued three singles — "Monsters", "Last Time" and "Run It" featuring Annika Wells, which recently reached No. 1 at U.S. dance radio. New tracks include "Everything That You Are", a bright instrumental which helps set the tone for the EP's sparkling energy, "Break Away" featuring Lisa Goe, an '80s-infused pop track, indie dance love song "Bad For You" (feat. 90'S KIDS),as well as "Higher" (feat. OPPOSITE THE OTHER) and intro track "Innocence".

MIDNIGHT KIDS' story began a couple of years ago when Dylan and producer Kyle Girard first met online and instantly connected on a vision and sound they were both striving toward. Since then, they've been able to put their distinct, 1980s-inspired spin on official remixes for THE CHAINSMOKERS, Pink, Gryffin, and more. In June 2018, they released their debut single, "Find Our Way", featuring klei, which ended up making its way onto the radio, earning the BPM Breaker on SiriusXM and more. Millions of streams later, they found their home at RCA where they continue to write their story and choose to live by a singular statement: "We are all MIDNIGHT KIDS. Let's tell our story together."

Dylan first confirmed his involvement with MIDNIGHT KIDS in a June 2018 social media post. He went public with his music career after the duo saw significant streaming success with one of its tracks, a remix of THE CHAINSMOKERS' "Young".

"We have put countless hours into every single aspect of this project and will not stop anytime soon," he wrote at the time. "This is just the beginning and I'm here to ask you all to be a part of the journey with us.

"I have put every ounce of heart and soul into this project and it means the world to me. This has always been my dream to pursue music at the highest level and to create and share music with the world."