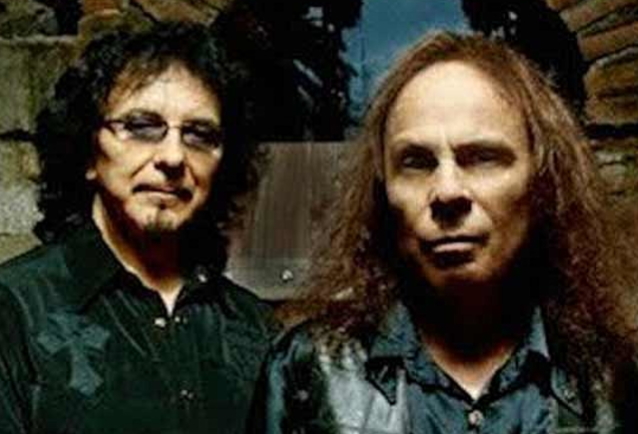 BLACK SABBATH guitarist Tony Iommi was among the attendees at the London premiere of the first-ever career-spanning documentary on the life and times of legendary metal icon Ronnie James Dio, which was held Monday night (September 26) at the Curzon Soho Theatre. Speaking to Metal Talk on the red carpet of the event, Iommi said about his late SABBATH and HEAVEN & HELL bandmate (as transcribed by BLABBERMOUTH.NET): "It was real sad because we were really on a roll when we'd done [the debut HEAVEN & HELL album] 'The Devil You Know' and we were touring and we were really enjoying it. And I remember talking to Ronnie when we were in Japan. We went for dinner one night. We said, 'Look, we're not gonna say we're gonna go for five years or whatever. We'll just try it and see where it goes. So we'd done the tour; we loved it and we enjoyed it. And when we were in this restaurant, I said to Ronnie, 'Do you fancy doing anything more?' And he said, 'Oh, yeah. We've gotta do another album. Let's do another album, another tour.' And that was the plan. That's what we were gonna do. And, of course, Ronnie didn't make it. But it was going so well and we had a great time being together. We loved working together. I loved working with Ronnie."

Iommi previously reflected on his time recording and touring with Dio as his bandmate in both BLACK SABBATH and HEAVEN & HELL in an April 2021 interview with Rockin' Metal Revival. At the time he said: "The last tour we did with Ronnie was real precious, and we had such a great time. And we really bonded. The last generation of the period with Ronnie was really close — everybody was close. Yeah, Ronnie was such a really nice person.

Dio replaced Ozzy Osbourne in BLACK SABBATH in 1980, recording the "Heaven And Hell" and "Mob Rules" albums, plus "Live Evil", before leaving in 1982. He rejoined the group 10 years later for an album called "Dehumanizer", and again teamed with the group under the HEAVEN & HELL banner in 2006. HEAVEN & HELL released the aforementioned "The Devil You Know" in 2009.

Ronnie's long-awaited autobiography, titled "Rainbow In The Dark: The Autobiography", was released on July 2021 via Permuted Press.