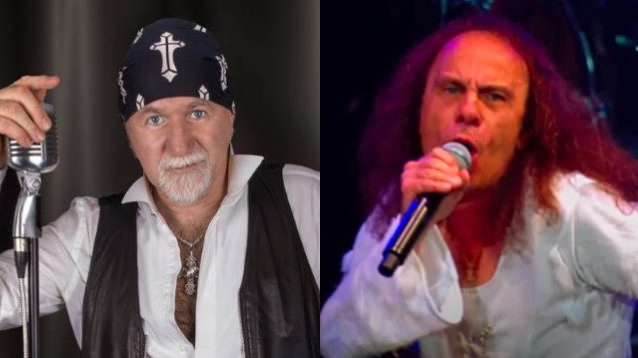 Tony Martin, who fronted BLACK SABBATH from 1987 to 1991 and then again from 1993 to 1997, told the "Metal Mayhem ROC" podcast that he only met Ronnie James Dio once — and he described it as a "short-lived" experience. "Actually, [BLACK SABBATH guitarist] Tony Iommi had invited me backstage to one of the 'Dehumanizer' shows here in England," he recalled. "I was backstage, and Ronnie was not happy — nah, he was not happy. I think he was really angry with Tony Iommi for inviting me back there.

"I tried to catch his eye backstage," Martin stated about Dio. "It was a relatively big affair, with people all over the place. And every time he walked past me, I went, 'Ronnie!' And he disappeared. 'Ronnie!' Eventually, I managed to catch his attention. I said, 'Ronnie! Come here.' So he walked over, and he just stared at me. And I thought maybe he was gonna hit me or something; he just stared. And I was trying to explain. I said, 'Ronnie, I love what you do, man. I'm a big fan.' And I said, 'You're a hard act to follow.' And he said, 'Good,' and walked off. That was it. [Laughs] He didn't stay. He just said 'good' and walked off. So that was my only conversation with Ronnie James Dio. [Laughs]"

Martin continued: "[Ronnie] wasn't happy that I was there. He must have thought he was being put on the spot. Iommi, obviously, hadn't told him that I was gonna be there. And after the 'Dehumanizer' thing is when I rejoined. So there was stuff going on in the background and I don't know what the issues were. But they hadn't been getting on well. Tony Iommi told me that it hadn't gone well with Ronnie. And I was back there after that. So my name has been attached to SABBATH for 11 years, more or less, without too much of a break."

Earlier in the month, Martin confirmed to Almost Human that he recorded some demos for SABBATH's "Dehumanizer" album during a period when Iommi and bassist Geezer Butler were having a hard time getting along with a returning Ronnie James Dio.