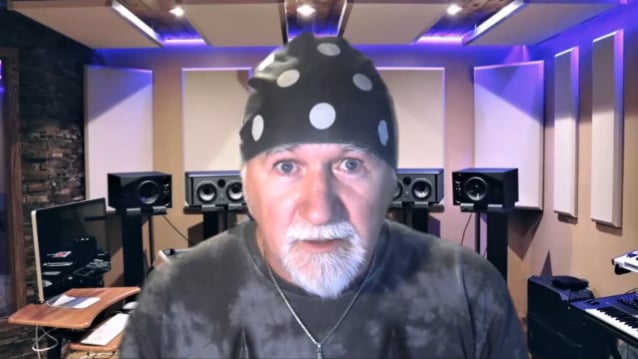 In a new interview with Canada's The Metal Voice, former BLACK SABBATH singer Tony Martin spoke about previously announced plans to reissue the albums he recorded with the band. Martin said: "Honestly, I have no idea what's happening with it. I know it's gonna be next year, but that's all I know."

This past summer, Martin told "The Rock And Metal Profs: The History And Philosophy Of Rock And Metal" podcast that "two record labels" were going to re-release the albums he recorded with SABBATH. "I don't know when, and I don't know what it's gonna look like," he said. "There was some suggestion a while back that we might be able to put extra tracks and stuff on it. I did offer, and I went to see [BLACK SABBATH guitarist] Tony Iommi and offered some things. And then he said we can't use anything new 'cause nothing new can be released under the BLACK SABBATH name. It can only be stuff that's got the original four members on it.

"I'm expecting it to be a remixed version of whatever the original was; that's what I'm expecting," Tony added. "So I await as you do to find out. Let me know if you hear it first."

When the interviewer expressed hope that the box set will include some live recordings from the Martin era of SABBATH, either in audio or video format, Tony said: "I recorded the writing session with… Eddie Van Halen came over and helped us write one of the tracks [for 1994's 'Cross Purposes' album]. And I had an eight-track recorder at the time in the 1980s, and I used to take it everywhere, this thing. I've got all of the writing sessions and rehearsals recorded. So I sent [Iommi] this, and he went, 'Wow! That's fucking great.' And I said, 'Well, you're welcome to use it, if you wanna put that on.' So, I don't know… Maybe you'll get that on there."

This past January, Martin reflected on his time with SABBATH during an appearance on "The Ron Keel Podcast", saying: "It doesn't haunt me. It's not a bad thing. I've got a lot to be grateful for. SABBATH is the reason why you, and the world, knows about my voice. So there are things to be grateful for. It was hard work for me. I'm 12 years younger than the rest of the guys, so even just circle of friends was different — they're hanging out with Ian Gillan and Brian May, and my best friend is Dave down the road. So that was a gap. And also the experience — they were way ahead of me in experience, at least 12 years further up the road from me, and I never could quite catch them up; they will always have that much more experience than me. So that was hard work."

He continued: "When I first got the gig, it was actually 1986 that I was put on standby when they were with Glenn Hughes on the 'Seventh Star' album. And I don't know what the issues were, but something went wrong with Glenn and they put me on standby. That scared me to death, 'cause it's Glenn Hughes. I can't sing like Glenn Hughes; nobody can sing like Glenn Hughes. Only Glenn Hughes can sing like Glenn Hughes. So that was really scary. Then they got Ray Gillen in. Then he left — he left to join BLUE MURDER with John Sykes, so they called me again and said, 'You'd better come down to the studio and try this out.' And they gave me one song, which was 'The Shining' off 'Eternal Idol', and then two days later said, 'Okay. You've got the job. You've got a week to finish the album.' So right from the start it was scary — it was huge; suddenly being the frontman of BLACK SABBATH was just ridiculous. And yeah, the whole association with me and my voice lasted 11 years."