TOOL, AVENGED SEVENFOLD, A PERFECT CIRCLE and ALICE IN CHAINS lead the lineup for the fourth annual Northern Invasion, set to take place Saturday, May 12 and Sunday, May 13 at Somerset Amphitheater in Somerset, Wisconsin, just outside the Twin Cities.

Northern Invasion 2018 will be bigger and better than ever with over 12 hours of music per day from the biggest and best rock bands on three stages, as well as a top tier camping experience. The Northern Invasion Good Eats area includes food offerings from top regional and national restaurants and vendors.

The music lineup for Northern Invasion 2018 is as follows (subject to change):

Maynard James Keenan of TOOL and A PERFECT CIRCLE said: "Looking forward to playing material from the new A PERFECT CIRCLE release at Northern Invasion. Bringing new songs to life in a live setting is always exciting."

"We spent a lot of time listening to our loyal Invasion fan base over these last several months to create a lineup that celebrates some of the rock legends along with delivering on our reputation for inviting the hottest up-and-comers in the genre," said Joe Litvag, executive producer of Northern Invasion. "Having heroes like TOOL, AVENGED SEVENFOLD, ALICE IN CHAINS, and STONE TEMPLE PILOTS matched with new sensations like PARKWAY DRIVE, BLACK VEIL BRIDES and RED SUN RISING, I think the fans will respond well. It’s going to be an unforgettable weekend!"

Northern Invasion general admission and VIP tickets (including layaway options),as well as hotel packages and all-inclusive camping options, and tent or RV camping add-ons are on sale now at this location. Fans are encouraged to buy early and save. New for Northern Invasion 2018: Each ticket price level has a limited number of tickets available, so attendees can save more by buying earlier. Ticket prices will automatically move to the next price level once a price allotment sells out. The layaway purchase option also allows fans to split the ticket cost into four monthly payments.

Specially priced tickets for Northern Invasion will be available for active military through partner GovX while supplies last.

The Northern Invasion campgrounds will be open from Friday, May 11 through Monday, May 14. Festival doors open at 11:00 a.m. on Saturday and Sunday.

Northern Invasion is produced by AEG Presents and Danny Wimmer Presents and is part of the World's Loudest Month concert series, which features the biggest names in rock music performing in six U.S. events in distinct atmospheres during five consecutive weekends in April and May of 2018. 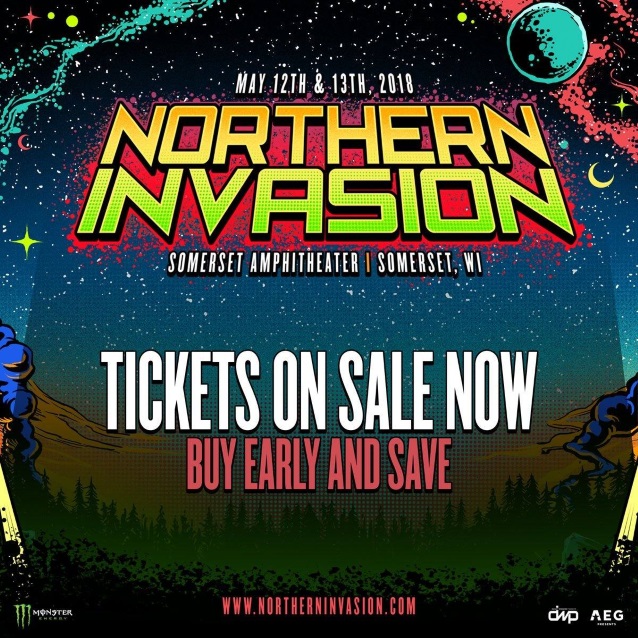