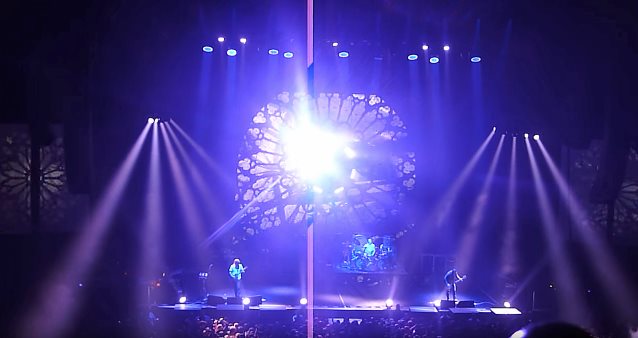 According to The Pulse Of Radio, TOOL kicked off its 2016 North American tour on Wednesday night (January 6) at the Bill Graham Civic Auditorium in San Francisco, performing the same set list that they delivered at their single 2015 show last Halloween in Arizona and opening with a cover of LED ZEPPELIN's "No Quarter". Also like they did at the fall gig, the band played a new instrumental called "Descending".

The stage show featured an almost overpowering array of lasers, along with singer Maynard James Keenan — in his usual shadowy corner near the back of the stage — dressed in a costume that Rolling Stone described as either "an armored, 'Dark Knight'-era Batman or a riot cop." The band also rolled out its now customary barrage of video images behind them as they played.

Guitarist Adam Jones told The Pulse Of Radio a while back how visuals have always played a major role in the band's music. "I've just always thought in vision, I mean, just, like, putting on headphones when I was a kid and trying to dream stuff while I was listening to music," he said. "I guess I still do that today when I play. But it's a lot more emotional than visual and I know that sounds pretentious, but it really is, what the four of us do. The visuals just kind of, like, bring themselves in it."

TOOL hasn't performed more than 20 shows in a single year since 2007.

Jones recently spoke to Rolling Stone about the progress of the songwriting sessions for the band's long-awaited follow-up to 2006's "10,000 Days" album. He said: "I'll tell you, it's wonderful. Things are really flowing and going really well, and I'm just blown away at the stuff that's coming together. I'm excited and can't wait for it to be done. It's something I've been missing for a long time [laughs], that beautiful collaboration that we have because we're all so different and have different tastes. But again, when you are all meeting in the middle and that thing you do that meets in the middle is just beautiful, it's very rewarding. So yes, I'm very happy."

He continued: "We probably have 20 potential song ideas now. Of course, 20 won't be on the record. We're just jamming. But I'll tell you, there's nothing better than having too many good songs then not enough. It's great. You pick your faves."