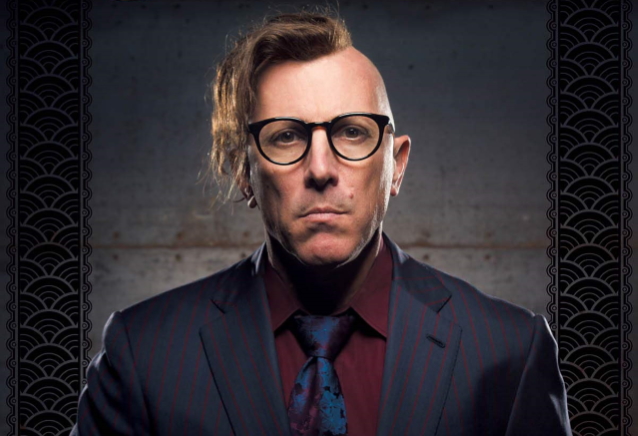 TOOL's MAYNARD JAMES KEENAN Says He Is 'Never Satisfied' With His Live Performances: 'I Think I Can Do It Better'

In a new interview with Rob Rush, Maynard James Keenan was asked why he thinks his various bands and projects — a list that includes TOOL, A PERFECT CIRCLE and PUSCIFER — have all managed to draw audiences worthy of arenas and theaters. He responded (as transcribed by BLABBERMOUTH.NET): "Well, they're not gonna support it if they show up and it's boring; they're not gonna come back. You have to have follow-through. You have to have a thoughtful presentation.

"People wanna be entertained; they wanna be moved in some way," he explained. "And I think in order to do that, depending on your agenda, people like me, I just need to do a thing and I need to do it well. And I'm never satisfied with how I did it; I think I can do it better. So if you get in that mindset — you're always trying to improve on the thing you did, even if it was the night before and you've done this thing ten thousand times, there's always room for improvement and adjustment. So I think that's what people have come to expect, is that they know that we are thoughtful and we're always thinking about fixing, correcting and making better."

Actor, performer, musician, entrepreneur, winemaker, athlete, writer and curious adventurer, Maynard is the embodiment of the archetypal artist. Best known as the vocalist in TOOL, A PERFECT CIRCLE and PUSCIFER, he has trusted the path he's followed and heeded his inner voice, ever open to synchronicities and unexpected turnings along the way.

In addition to his musical output, Keenan was able to launch a second career as a winemaker with Caduceus Cellars and Merkin Vineyards from his home in the hillside town of Jerome, Arizona, where he has lived since the mid-1990s.

PUSCIFER's "Existential Reckoning" tour will kick off June 9 at The Smith Center in Las Vegas. Joining Keenan at the shows will be longtime PUSCIFER members Mat Mitchell and Carina Round. The trek will include the group's largest scale performances to date, with shows slated for Los Angeles's venerable Greek Theatre (site of Keenan's one-time-only Cinquanta mini festival),Brooklyn's movie palace-turned-concert-hall Kings Theater and the state-of-the-art Mission Ballroom in Denver.

The tour in support of PUSCIFER's highly regarded 2020 album "Existential Reckoning" will mark the band's first U.S. dates since 2016.

PUSCIFER was unable to play live shows to promote "Existential Reckoning" at the time of its release due to the ongoing global pandemic. But the band did manage to livestream performance of the album in October 2020, a show which was made available as on-demand/VOD version and an accompanying soundtrack in November 2021, with physical versions of the soundtrack and film (vinyl and VHS) available via retailers on February 25.