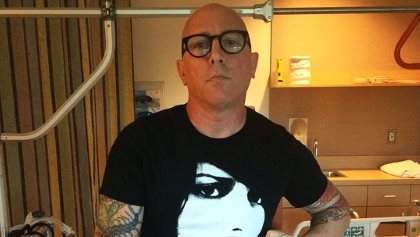 Maynard James Keenan of TOOL, A PERFECT CIRCLE and PUSCIFIER has just undergone total Hip replacement surgery. He posted a post-operation photo on Facebook with the following explanation: "Didn't want to freak anyone out. Wanted to wait until out of the woods. Years of foot stomping left me with no cushion in my right hip. Full replacement yesterday. Walking today."

Keenan, who was recently presented with a purple belt in jiu jitsu, added: "12 weeks, back on the mat to work toward the brown belt."

Keenan told Punchdrink.com that a new PUSCIFER set is nearing completion for a tentative fall release, although he did not elaborate with any further details.

PUSCIFER has existed in some form since 1995 but only began making records in 2007.

TOOL guitarist Adam Jones revealed in March that the band had finally settled a multi-level lawsuit that had dragged on for eight years and set back its recording and touring plans.

Jones also revealed that an undisclosed member of the band faced a "really scary do-or-die, serious illness" not long ago.

The band is now reportedly working at a faster pace on music for its first new studio set since 2006's "10,000 Days".

Didn't want to freak anyone out, wanted to wait until out of the woods. Years of foot stomping left me with no cushion...