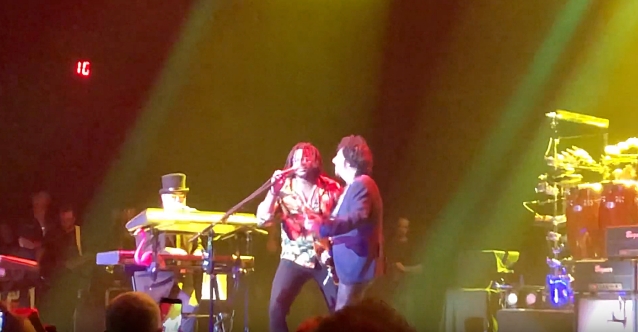 Paich had been absent from TOTO's live performances over the last few months due to health problems.

Guitarist Steve Lukather told The Morning Call about his bandmate's medical condition. "It was really the scariest thing ever," he said. "He had some sort of a seizure [on the bus during a European tour] or something like that. We went home and he had to retire from touring because of his health. Apparently, he pushed himself a little too hard and he fell. I mean, Dave's still playing. He can sing. He's up and about and he's happy and he's walking around. But he's not built for speed anymore."

Lukather told The Morning Call that TOTO's concert in Philadelphia will be the band's last performance for quite some time.

"I don't know what the future-future's gonna be, but I do know that's gonna be the last show in Philly for the foreseeable future," he said. "And certainly the end of this configuration of TOTO."

Speaking about the possibility of TOTO returning again with a different lineup, Lukather said: "I don't know, man. I can't predict the future. I can tell you that this version is dead October 20… We gotta take a break from all this. We were beat up really badly and we gotta heal and figure out what's going on. I mean, the music's still there. I'm not saying I'm never gonna play this music again — that would be stupid to say; that would be a lie. I can play whatever I want from my entire career with whomever I want to, and so can everybody else. But I don't know what that is yet."

He continued: "We've been working really hard for a really long time if you look at the last 10 years of touring for the band, we've toured more than we ever have. We're playing better than ever. That's the irony. ... The band, we're playing great. When we walk on stage, man, it's like we're kids again, and we just give it all we got. It keeps you youthful inside. I feel great — I feel better than I did when I was 40, you know? As far as physically and playing-wise, the band's matured. We're playing together. It's fun — I'm having a great time. And that two hours plus on stage is what we're out here to do. That's our big payoff. We don't get paid for that — we get paid for the other 20 hours a day where we're in a very nice little prison called a hotel room. 've been on the road my whole life. Going out and seeing the sights — I've kind of done that, you know?"

Few ensembles in the history of recorded music have individually or collectively had a larger imprint on pop culture than the members of TOTO. As individuals, the band members can be heard on an astonishing 5,000 albums that together amass a sales history of a half a billion albums. Amongst these recordings, NARAS applauded the performances with more than 200 Grammy nominations. Collectively, TOTO has over a billion streams worldwide on all streaming services.