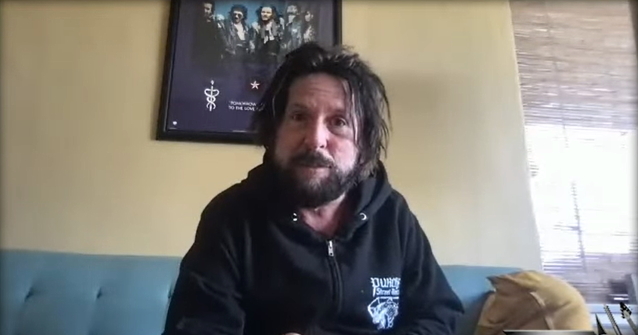 TRACII GUNS On Decision To Settle Lawsuit Against STEVE RILEY Over L.A. GUNS Name: I Didn't Want Him To 'Die In The Street'

Tracii Guns has once again commented on last month's out-of-court resolution of the legal dispute over the rights to the L.A. GUNS name. Under the terms of the settlement agreement, he and singer Phil Lewis will continue to operate under the L.A. GUNS trademark, while Steve Riley and his bandmates from the other version of L.A. GUNS will now operate under the new name RILEY'S L.A. GUNS.

Speaking to The SDR Show, the guitarist said (as transcribed by BLABBERMOUTH.NET): "We ended up settling in a way where, basically, [Steve] licenses the words L.A. GUNS for free; I'm not even asking for a percentage of when he plays. I'm just saying, 'Hey, I could have taken your house. I could have taken anything you own. But I don't want you to die in the street, and I don't want you to be poor.' And I really love his son, Cole. It just got to the point with all this litigation…

RILEY'S L.A. GUNS features Riley alongside Orlando, Florida-based guitarist/vocalist Kurt Frohlich, bassist Kelly Nickels (a member of L.A. GUNS' "classic" incarnation) and guitarist Scott Griffin (who played bass for the band from 2007 until 2009, and then again from 2011 to 2014).

As previously reported, L.A. GUNS has set "Checkered Past" as the title of its new studio album, due in November via Frontiers Music Srl. This will be the third studio album since the much welcome reunion of the band's core foundation of Lewis and Guns. It will follow the well-received studio albums "The Missing Peace" and "The Devil You Know", plus the live release "Made In Milan", and a covers EP "Another Xmas In Hell".