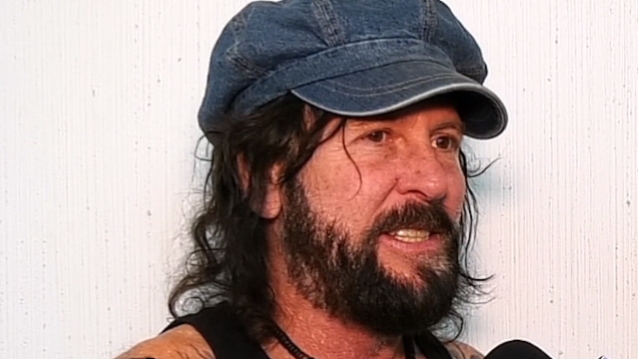 TRACII GUNS Says STEVE RILEY Is 'A Piece Of S**t' For Launching His Own Version Of L.A. GUNS

Tracii Guns says that Steve Riley is "a piece of shit" for assembling his own version of L.A. GUNS to play an East Coast festival this spring.

When the M3 Rock Festival — one of the largest annual '80s rock-themed events in America, if not the world — announced its 2019 lineup, L.A. GUNS was on the list of scheduled performers. It soon became clear, though, that the band who takes the stage that day won't include Guns or singer Phil Lewis, as the show will mark the first — and, as of now, the only — appearance of a group anchored by Riley, who still owns half of the L.A. GUNS name, and bassist Kelly Nickels, who played on the band's first four albums.

Asked by "The Blairing Out With Eric Blair Show" how he feels about the drummer going out and playing gigs as L.A. GUNS, Tracii said (see video below): "He's a piece of shit. That's what I think of it." He then addressed Steve directly, saying: "You owe me a lot of money, you fucking ugly fuck. And fuck you."

Tracii also talked about the importance of the relationship between brands and bands and how sometimes brands carry more weight than the individual bandmembers.

"I think that's probably true in some cases," Tracii said. "But real fans… If I'm gonna go see AEROSMITH, [Steven] Tyler and [Joe] Perry have gotta be there. It's pretty straight up. LED ZEPPELIN — Bonzo, John Paul Jones, [Robert] Plant and [Jimmy] Page. That's another scenario. I don't care what you call your band. Those four guys are in that band; that's what I wanna see. L.A. GUNS is not that band. And the reason I know that is because Phil had a version, I had a version. When we're together, we do four times the business when it's our names with it. So I feel sorry for people whose brand is more important than the band.

"A lot of musicians I've met are really desperate," he added. "I understand why, but it's, like, you've got talent? Show it. Do it."

Riley is the longest-tenured member of L.A. GUNS, a group he joined shortly before the release of their 1988 self-titled debut. (While he is pictured on the album, he did not actually perform on it.) Although the band has famously featured more than 50 members in its ranks through the years, with the exception of a two-year period in the early 1990s, Riley was the sole constant from 1987 until the end of 2016, when the group that he and Lewis managed to keep alive for nearly 15 years without founding guitarist Guns (who quit the band in 2002, on the eve of the release of their acclaimed album "Waking The Dead") dissolved. Since then, Lewis and Guns — who, after years of acrimony, buried the hatchet in 2016 — have forged ahead as L.A. GUNS while Riley focused on other projects.

The Guns-Lewis version of L.A. GUNS will release a new album, "The Devil You Know", on March 29 via Frontiers Music Srl.