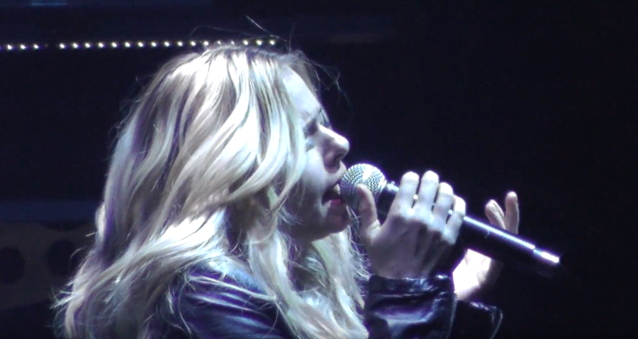 TRANS-SIBERIAN ORCHESTRA performed a previously unreleased song called "Hey, Can You Hear Me Now?" during its concert on Saturday, December 21 in Newark, New Jersey. The track was originally written by founder/composer/lyricist Paul O'Neill more than three decades ago and was recently uncovered on a cassette tape left behind by the TSO visionary, who passed away in April 2017.

Just before launching into "Hey, Can You Hear Me Now?", guitarist Chris Caffery told the audience about the song's origin (see video below): "We were in the studio this summer, and we were listening to a cassette tape that we found in a box. And that cassette tape had a song on it that Paul wrote and recorded 35 years ago. It's this beautiful song — just Paul singing with an acoustic guitar. It was like he was speaking to us once again and reminding us about the value of that word 'time.' And we're gonna do that song for you all for the very first time. I'm gonna bring back out Miss Kayla Reeves. It's a song called 'Hey, Can You Hear Me Now?'. And boss, I hear you loud and clear."

"There's a lot of stuff that was not completed that Paul wanted to see come to life," Pitrelli said. "He wanted this to live forever, and it's comforting to know that that's being accomplished now that there's new music being worked on. It just makes my heart smile, because at the end of the day, Paul's wishes are coming true."

Since its historic touring debut, TSO has played nearly 2,000 winter tour shows for more than 16 million fans, with tour grosses of more than $725 million, and has sold in excess of 12 million albums and DVDs. Year after year, TSO hits the upper reaches of the domestic and worldwide tour charts. Recently in July 2019, TSO was ranked No. 6 on Pollstar's North American Tours Mid Year chart and No. 8 on Pollstar's Worldwide Tours Mid Year chart. In 2018, TSO came in at No. 16 on Pollstar's 2018 Top 200 Year End North American Tours and at No. 17 on Pollstar's 2018 Year End Worldwide Ticket Sales Top 100 Tours chart with more than 925,000 tickets sold. Additionally, in July 2019, TSO was featured in Billboard's Money Makers of 2018. In 2009, Pollstar ranked TSO at No. 20 on the "Top Tour(s) of the Decade" and Billboard placed TSO at No. 25 on its "Top Touring Artists of the Decade."