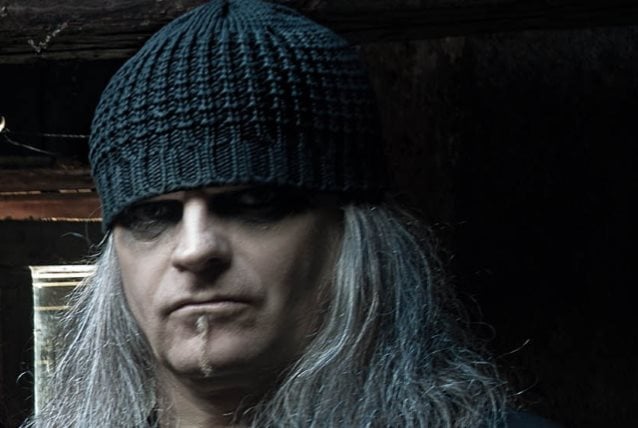 TRIPTYKON's THOMAS GABRIEL FISCHER: 'I Have No Respect For Record Companies'

Spain's TNT Radio Rock conducted an interview with members of TRIPTYKON — the occult/avant-garde metal project formed by former HELLHAMMER/CELTIC FROST singer, guitarist and main songwriter Thomas Gabriel Fischer (a.k.a. Tom Gabriel Warrior) at this year's edition of the Leyendas Del Rock festival, which was held August 9-12 at Polideportivo Municipal de Villena in Villena, Spain. You can watch the full chat below. A few excerpts follow (transcribed by BLABBERMOUTH.NET).

On the band's plans to work on a follow-up 2014's "Melana Chasmata" album:

V. Santura (guitar): "It's pretty brand new that Norman [Lonhard, drums] is leaving the band. We have to audition new drummers. That has to be done first before we can think about writing a new album. That's basically the next thing we have to do."

On whether the band is starting to write new material:

V. Santura: "I don't think we can say much about the new material, yet. Because the main thing is first we need to get a new drummer before we can start arranging songs, so it's up to that."

Thomas Gabriel Fischer (vocals/guitar): "I have a lot of very definite ideas about the album, but I'm not going to publicly divulge those here a year from when the album is going to come out. That would be pointless. There's so much work ahead of us still to realize these ideas, to make them a reality. We're a very fluid band when we get in the studio. A lot of the songs change until the very last days. We're certainly not going to do a mediocre album. We're either going to do a fantastic album or not at all."

On how TRIPTYKON's influences shape its sound:

Thomas Gabriel Fischer: "TRIPTYKON has a very particular sound and I'm absolutely convinced that you'll hear from the very first second that it's TRIPTYKON. I think we all feel very comfortable with that sound. It's not a very restrictive sound. TRIPTYKON's sound has a very large bandwidth, from metal to hard rock to wave with a little jazz and a little classic. We have tremendous creative leeway within TRIPTYKON's sound. That's experimental enough for me. I don't want to reinvent the band with every album. I'm very happy with the sound we have found. We've worked very hard on developing this sound, so it's going to be more of the same. Of course we are going to try to write very original material within this sound."

On Fischer's opinion of CELTIC FROST being a pioneering metal band:

Thomas: "I don't really have an opinion on that because that's not the way I look at myself and that's not the way I live. I'm a totally normal human being. I'm hugely passionate about music; that's really what my concern is. That's why I'm in a band. There's not a second where I walk around thinking of these things. I think they're very uncomfortable things, very abstract things to me and I certainly don't want to start believing this kind of hype myself because it will be detrimental. To me, it's a huge struggle to write a good album. It's not something that is easy. It's a huge duty, a huge struggle. It's very difficult. I don't know how many times I could write a good album. I'm normal, just like everybody else. To do a good album is a massive, massive task. It's not easier for me than anybody else. I view myself with enough reality, I think. As a matter fact, the older I get, the more realistic I look at myself. I'm just a musician. I'm really just a musician. I love looking at my guitars because I love the way they sound, I love the way they look. It's really basic stuff that fascinates me. I love playing with these people because they're my very closest friends. I think we have a good sound, an original sound. This is really my world."

On CELTIC FROST's 1984 "Morbid Tales" debut ranking at No. 28 on Rolling Stone magazine's "The 100 Greatest Metal Albums of All Time" list:

Thomas: "It was, of course, a huge honor to see this. On the other hand, I'm old enough to know that lists like that are highly subjective. There could be millions of lists with different results. It reflects the opinion of a small group of people. It's flattering because it's an important music magazine, but that doesn't make it the truth. There's people who hate my music; there's people who love my music, just like I love certain bands and I hate certain bands. It's all subjective. I don't really see the purpose behind it. The first moment you feel proud, but when you think about it, there's no purpose behind it. What you need to do, with every album you do, is strive to deliver the best quality. It's still important to me to do albums with good quality. I'm proud of my past work, but I don't want to spend the rest of my life living off of the work that's thirty years old. I'm still existing."

On the recent BMG/Noise reissues of CELTIC FROST's seminal catalog, a campaign Fischer ultimately withdrew his endorsement from because of disagreements on the content on his liner notes where he was overly critical of Noise Records' 1980s management:

Thomas: "That's a very long story. The albums have been re-released. I think they sound fantastic because Victor [referring to V. Santura] and I did the remasters and Victor's expertise as a sound engineer was crucial in this project. The feedback I've been getting ever since these reissues have been on the market has been phenomenal. That's what we strove to do. We wanted to create the best-sounding CELTIC FROST reissues. I had some disagreements with BMG Records who own the rights to these albums these days, but it's of minor importance. It was a disagreement of what should be in the booklet and what should not. It's nothing new in the recording industry that the record company doesn't have the same opinion as the recording artist. But as far as the sound is concerned, I'm very proud of what we've done, most of the credit has to go to Victor. I'm very proud of the achievement.

"I have no respect for record companies. I started in the 1980s worshipping — I wanted a record deal; I worshiped record companies. They represented, to me, the key to becoming a musician, which was my dream. But after thirty-five years of learning about myself, I've seen the realities of the music industry. We are fortunate enough to work with our own record company, so we have all the freedom in the world. Because we have our own record company, we can work at a very high level and professional. I don't like to work with companies who work on a lower level of professionalism. So I sometimes lose my patience when somebody doesn't work at the level we are used to. I didn't spend thirty-five years in the industry to deliver mediocre. If I wanted to release something, whether it's an old CELTIC FROST album or a new TRIPTYKON, I would like it to reflect myself or the artist on one hand. On the other hand, it should reflect the highest level of quality possible. If somebody fails to do that, yes, I'm unhappy. I think that's a very natural instinct. My name is on the record. If a record company fucks up, my name is still on there."

Released in April 2014, "Melana Chasmata" was made available through a collaboration between TRIPTYKON's own label, Prowling Death Records Ltd., and renowned metal giant Century Media Records.

In June, BMG reissued four out of five of CELTIC FROST's Noise-era studio albums: "Morbid Tales", "To Mega Therion", "Into The Pandemonium" and "Vanity/Nemesis". The only exception remains 1988's controversial, hair-metal-inspired "Cold Lake", an album Fischer has often labeled as an "abomination."