TRIUMPH guitarist/vocalist Rik Emmett spoke to The Metal Voice about the first-ever feature documentary about the band's dramatic career, "Triumph: Rock & Roll Machine" (changed from the working title of "Triumph: Lay It On The Line"),which will receive its world premiere on Friday, September 10 at the Toronto International Film Festival (TIFF). Asked about what it was like to see the TRIUMPH story — "warts and all" — told in film form, Rik responded (as transcribed by BLABBERMOUTH.NET): "You say 'warts and all,' and I think it's the 'and all' that I would take issue with. First of all, Banger Films made it, and they've done this before — they've done it for IRON MAIDEN, they've done it for RUSH, they've done it for Alice Cooper and ZZ TOP. I mean, these guys, they're experienced. But they're telling their perspective of the story. They've done their research and then they decided, 'Well, this is the angle we're gonna take.' So that's the first lens you're getting. The other thing is it's not my story, because I was only a part of TRIUMPH. And, in fact, I don't actually own that brand; Gil [Moore, TRIUMPH drummer] owns that brand. So you're gonna get a little bit more of Gil's angle of it than Rik's. And that's fine — I'm cool with that — but in truth and in fairness, I think people need to know that. That's what you're gonna see — you're gonna see something that's been passed through those filters."

Produced by Emmy and Peabody award-winning Banger Films, "Triumph: Rock & Roll Machine" is a Crave original documentary that was previously described as "a celebratory, exhilarating thrill ride through the history of one of rock's most unsung acts." The film covers TRIUMPH's humble beginnings as staples of the GTA circuit in the mid-'70s to their heyday as touring juggernauts, selling out arenas and stadiums all across North America with their legendary spectacular live shows — and way beyond.

Last year, Emmett told The Metal Voice about the making of "Triumph: Rock & Roll Machine": "There's a surreal nature to it — you're going back in your life, and they're reminding you of things that you'd completely forgotten," he continued. "And you're going, 'Oh, yeah.' And then they're digging deeper, and they're going, 'So, when the band broke up…' And you're going, 'Okay, this hurts, actually.' I don't wanna have to go back to that, because the rise and the fall and the rise again, it's the fall that hurts. I don't wanna go there. I thought I'd put all this behind me. It was ugly, heavy baggage." 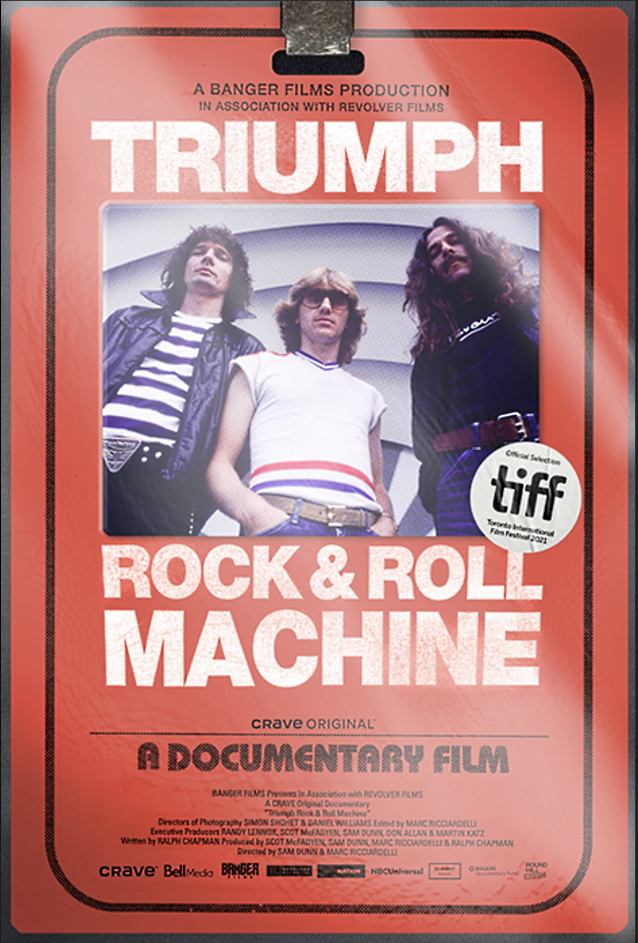