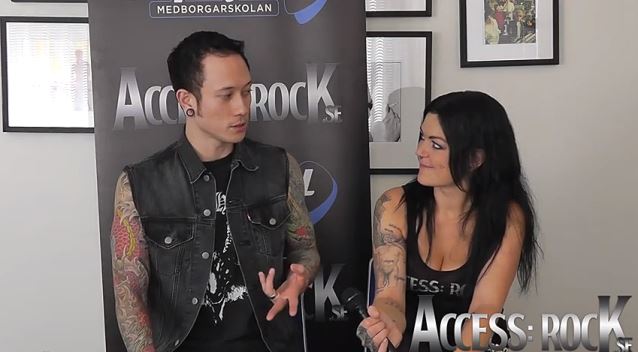 Anna Dave Bertram of Sweden's Access: Rock recently conducted an interview with guitarist/vocalist Matt Heafy of Florida metallers TRIVIUM in Stockholm. You can now watch the chat below.

TRIVIUM's new album, "Vengeance Falls", will be released on October 15 via Roadrunner Records. Produced by David Draiman (DISTURBED, DEVICE),the follow-up to 2011's "In Waves" is available for pre-order at Trivium.org. The first single, "Strife", is available as an instant download with all pre-orders.

In a recent interview with ARTISTdirect, Heafy stated about "Vengeance Falls": "Going into this record, the initial goal was to write the absolute best songs we possibly could. We didn't go into it thinking, 'We need to be technical, we need to be brutal," or anything like that. It was about making the best possible music. Looking at it in retrospect, I feel it does encompass TRIVIUM fans have loved over the years through our first five records. Then, it expands upon those tools with the new music. It's a great summary of everything we've done, taking the listener to another place at the same time. I think it's really awesome it does. Maybe 'Ascendancy' and 'Ember To Inferno' were similar, but 'The Crusade' was the exact opposite. 'Shogun' was technical. 'In Waves' was simple. This one has everything, which I really appreciate."