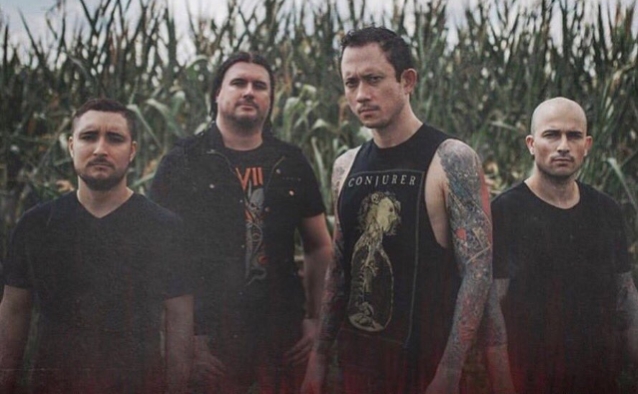 Florida-based metallers TRIVIUM will release a new single called "Catastrophist" on Thursday, February 27. A teaser for the track can be found below.

"Catastrophist" is the first single from TRIVIUM's next studio album, due later in the year via Roadrunner Records. The LP will be the follow-up to "The Sin And The Sentence", which came out in October 2017. That effort marked the band's first release with drummer Alex Bent, who joined TRIVIUM in 2016.

In a 2018 interview with the 90.3 WMSC radio show "The Metal Teddy Bear Experience", TRIVIUM guitarist Corey Beaulieu said that he and his bandmates "definitely" wanted to work with Josh Wilbur again on their next album. "We had a blast with Josh" during the making of "The Sin And The Sentence", he said. "Once we worked with him and became friends with him, his personality and his vibe and energy is the perfect combo with how we are as a band and how we like to work and how we like the vibe of making a record. He fit right in."

TRIVIUM will support MEGADETH and LAMB OF GOD on a 55-date North American tour, which will be split into two legs. The first leg of the tour kicks off June 12 at Jiffy Lube Live in Bristow, Virginia, and wraps August 1 at the Concord Pavilion in Concord, California. The second run launches October 2 at iTHINK Financial Amphitheater in West Palm Beach, Florida, and runs through November 13 at the Reno Events Center in Reno, Nevada. Additional support on the trek will come from IN FLAMES.