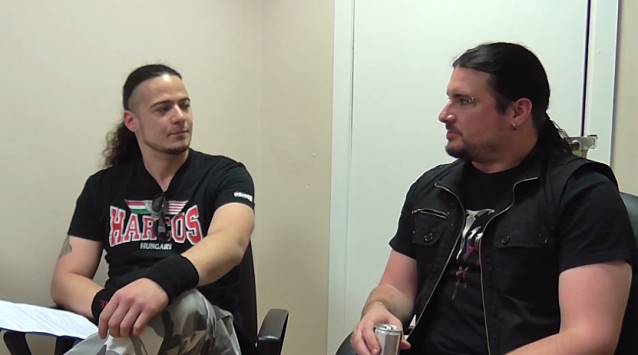 Impact metal channel conducted an interview with guitarist Corey Beaulieu of Florida metallers TRIVIUM before the band's June 17 concert in Dublin, Ireland. You can now watch the chat below. A couple of excerpts from the interview follow (transcribed by BLABBERMOUTH.NET):

On the abrupt mid-tour split with drummer Nick Augusto in May due to personal differences and addition of the band's drum tech, Mat Madiro, as Nick's replacement:

Corey: "It just wasn't working out and we just felt it was time to… At that time, it was best to go our separate ways instead of trying to keep going on and then something happening and having an effect on shows or anything like that. [The split] was very calm and chill, but it just needed to happen. Sometimes, after awhile, things just aren't going the way you kind of hope for and you've gotta make a switch. It's a pain in the ass to switch members and get someone up to speed. But Mat's been doing great. He came into the role and he's been doing a great job playing the songs and playing the shows. It was pretty smooth considering the circumstances — being in the middle of a tour and having to get a new drummer up to speed in 24 hours. But it was just something we had to do just to make sure that, moving forward, everything was tip top, 100 percent ready to roll."

On whether Mat is a permanent replacement for Nick:

Corey: "He's drumming for us for the foreseeable future, for the rest of the album cycle, which goes up 'till about December. And then we're just gonna see where we're at. We're not gonna make any quick decisions; we're just gonna let him get comfortable. He's only played about 20 shows with us, and before playing with us, he never really had played in front of people before. So we're just gonna let him ease into it, get comfortable playing the songs and knowing them, get comfortable playing shows, and then we're gonna see what happens. He's still… he plays a show and he's still part of the crew, 'cause he was the drum tech and he's teching himself, so he's going between both sides. Everything's been going great, the shows have been awesome, he's been playing great, so we're gonna leave it like that until we finish up all the shows we have booked and we're gonna see where it goes from there. We're gonna record a new record, and we'll see if he's the guy. It could possibly be him; you never know. [That decision will be made] months and months away from now. We're just taking it easy and not making any quick decisions and [taking chances on it] not being 100 percent down the road. That is the right thing to do. So we're keeping it fair for everybody and not leading anyone on. Playing shows and having fun is pretty much what we're just having it be for now."

On TRIVIUM's plans for after this summer's Rockstar Energy Drink Mayhem Festival:

Corey: "We'll take a break for a while, have a couple of months off. Then we've got Knotfest in Japan. And then, hopefully, we're working on finishing the album [cycle] off with a tour in Australia. And then after that, we're pretty much not touring for awhile; we're just gonna working on a new album. I guess after this year, not many people are gonna see us play for over a year or so… We've been on tour pretty much non-stop since February. So once we get back in August, we're gonna [have some] vacation time and just be at home and decompress from [the road life]. We're actually gonna enjoy being at home, since we haven't… We've been home for about, like, a week since February. So it's just down time to relax and just kind of recharge. And then usually when we're home and we have that break, everyone just picks up a guitar and starts working on [new music]. We have a lot of stuff written, so we're gonna be working away at that during our free time. But that's just time away from the band mostly, since it's been such a busy year."