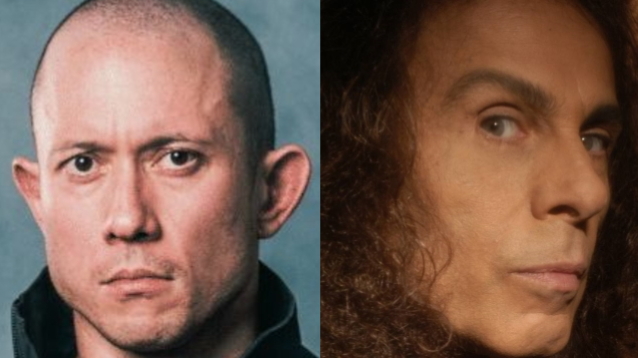 TRIVIUM's MATT HEAFY: BRUCE DICKINSON Told Me Someday I Would Have A Voice Like RONNIE JAMES DIO

In a new interview with Metal Wani, TRIVIUM frontman Matt Heafy recalled meeting two metal legends, IRON MAIDEN singer Bruce Dickinson and RAINBOW and BLACK SABBATH vocalist Ronnie James Dio, on separate occasions a decade and a half ago. He said: "We were interviewed on Bruce Dickinson's radio show in 2006, [when we were promoting] 'The Crusade'. And I remember I was, like, 'I've gotta talk to this guy about vocals. I asked him all these questions about vocals, and what he told me in the end was, like, 'I believe someday your voice will develop to be something like Ronnie James Dio.' That's what Bruce Dickinson said to me. I was, like, 'Thanks, man.' It stuck with me forever. Then, [in October] 2007, we're playing [a show in Japan opening for] HEAVEN & HELL and I'm able to meet Dio. I told Dio that same story. I said, 'Bruce Dickinson said someday I'd have a voice like you.' Ronnie James Dio laughs, smiles and he goes, 'You know, Bruce finally admitted I'm one of his heroes.' And that was kind of the end of that. And we shared a glass of wine together. And that was just a very trippy night."

Back in 2015, Heafy told Full Metal Jackie's nationally syndicated radio show that seeing Ronnie James Dio with HEAVEN & HELL really had a profound impact on him and his bandmates. He explained: "At that time, I was a casual fan of the DIO material. I'd known the big hits. I don't really know much aside from the 'Holy Diver' record. And I definitely missed his SABBATH-era material. So when I saw that set, specifically the song 'Heaven And Hell', it showed me how else I wanted to depict the metal that I was creating. Like the same way when I first heard METALLICA and I never heard metal in my entire life. I never heard metal delivered in that way. And to be able to hear Dio live and be able to hear Tommy Iommi live, to be able to hear how that was portrayed with that band, it really just blew my mind and blew all of our minds.

"When we met Dio afterwards, it was pretty life-changing to be able to meet one of the greatest metal singers of all time and really be welcomed by him," he added. "And he treated us so well and he was very humble and very polite. It was amazing. It was really, it was one of those moments where, looking back at it, it doesn't seem real. And after that night, I picked up my guitar and inevitably started writing some that sounded like the song 'Heaven And Hell', I feel. Well, I wasn't trying to make something that sounded like it. The first thing that came out is something that was obviously inspired by that song."

TRIVIUM's tenth album, "In The Court Of The Dragon", was released in October via longtime label Roadrunner Records. The record was produced and mixed by Josh Wilbur and recorded in the fall of 2020 at Full Sail University in Orlando. The album cover is an original oil painting by French artist Mathieu Nozieres.