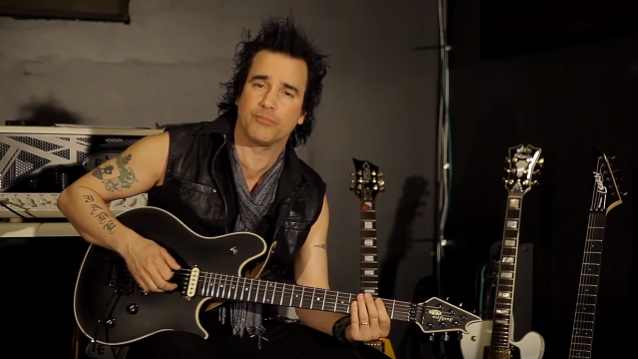 TRIXTER guitarist Steve Brown and bassist P.J. Farley recently spoke with Meltdown of the Detroit radio station 101 WRIF. The full conversation can be streamed below. A few excerpts follow (as transcribed by BLABBERMOUTH.NET).

Steve: "Our [debut] record came out in May of 1990, and we went out and started the grass-roots campaign and touring locally, and branching out, going to Baltimore and West Virginia. We started doing what bands always need to do, which is go out and shake hands, kiss babies and bring the music to the people. We made a great video for 'Give It To Me Good'... we had to wait a while. We made it, I think, in June, and it didn't get added to MTV until September. Then, boom... it was incredible. It happened so fast and kind of overnight, but there were a lot of years working up to it, to get to that point."

Steve: "When we were doing it back then, it just seemed like everything, this was the way it was supposed to happen — we made a record; the record company really likes us; we're going to get on MTV; we're going to have a No. 1 video; we're going go out on tour and everything's going to be great; people are going to make dolls of us; we're going to be rock stars. You get in that mindset, and then what happens is... we had the best time in the world. Whatever happened... People go, 'Oh, man. It was a bummer you guys got [in] at the tail end of the whole '80s hard rock thing.' We were just glad to be a part of it in any way, shape or form. We were a real band. We went on tour with POISON and SCORPIONS in 1991, and we were No. 1 on MTV. We were helping sell tickets. We weren't a buy-on band – we got asked to be on those tours because we were going to add something to it, help the tours. It was magic, man."

On touring with KISS:

Steve: "KISS was the band that got me going. That was the 'Revenge' tour. Though the success of the that tour wasn't that big as far as numbers and ticket sales, the fans loved it. We had a lot of great shows. Touring with them was incredible. Those were the guys who got started when I was a little kid. When I was 8 years old, I started playing guitar because of Eddie Van Halen and KISS. I owe them a great deal."

Steve: "We negotiated a huge deal. We got a million dollars for our second record because our first record... this happens all the time, because the record business is corrupt, and the artist is always the last one to get paid. When you have an opportunity to take advantage and get what you deserve, you have to pounce on it. We renegotiated a great deal, and we were able to make our second record... we worked at the best studios in the world; we worked with Jim Barton, who worked with RUSH and QUEENSRŸCHE. We made an amazing record, but unfortunately, it was horrible timing for it because of the whole grunge era."

On how grunge changed things:

Steve: "We were in such a bubble. What happens with bands when they become successful, you have your bubble, and that's your management, your crew, your family, your friends, and they're all telling you how great you are, because you're making money. We were completely clueless to what was going on. We were like, 'Hey man, this is great — we're playing sold-out arenas; we're recording in the best studios; we were living in L.A., finishing up the 'Hear!' record; we each had rental Mustangs, staying in the best hotels. We were living it, and I'm really thankful that we did do that, because we were one of the last bands that were able to get big budgets to make records. We worked in the best studios in New York, L.A., Philadelphia. You don't do that anymore — bands don't get that chance anymore. The MCA money was what bought me my house, and I was able to build a studio. Still to this day, it's the greatest investment I've ever made."

On how the band reunited after more than a decade apart:

Steve: "Just a couple phone calls. It was time. 2007 was when the seeds got planted, and it had been creeping up for years. There was definitely a resurgence in the hard rock of the '80s. It was the Rocklahoma festival in 2007 that everybody was kind of like, 'Wow, this looks promising.' We knew that when we ended the band, it was never that we were going to be broken up forever. It's just, 'We're taking a little vacation — put it on pause, do our own thing.' Luckily, we were young enough... 2008, we put the band back together, and it's been a lot of fun."

On the keys to the band's success:

P.J.: "Luck. We've had a little bit of bad luck too, but we are very blessed and lucky to even have what we have right now. We got in at a good time when the getting was good, so we're kind of grandfathered in to be able to do this right now. If I was in a band starting out right now, I don't know how hopeful I would be. I would enjoy it because I'm making music, and that brings joy to me, but as far as wanting to take over the world and rule the world and make a lot of money, those dreams are going to be crushed. The getting's not good anymore."

Steve: "I think that why we're still here and still successful [is] we're professionals. We do this for a living, and we're blessed to do that. We get paid to fly all over the world, fly all over the country and play rock n' roll for people. I think for us, our attitude, because you love something so much and we're thankful — we're very grateful [that] we're still able to do this. We have a name, and we sell tickets, and we're blessed in that sense that we're able to do this. We love what we do."

On playing with DEF LEPPARD:

Steve: "I've been filling in for the last five years. Those guys have been friends of mine for 30-plus years, since I was a little kid right when TRIXTER got signed. Their manager back in the day was the guy who helped us out. Phil's [Colllen] one of my best friends. I've been filling in for Vivian Campbell, so I filled in and did 13 or 14 shows with them since 2013. Then this year, it was a really crazy thing because it was on one day's notice. I had to learn the whole show. I knew all the songs, but I had to learn Phil's parts as opposed to doing Vivian's and the vocals. It went incredible."

Over the past two years, Brown and Farley have performed live semi-regularly with MR. BIG vocalist Eric Martin. Their next show together will take place on September 6 in Hinckley, Minnesota.