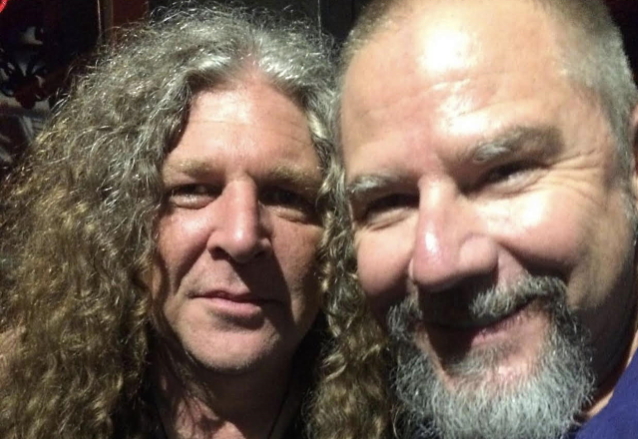 TROUBLE Singer KYLE THOMAS Pays Tribute To ERIC WAGNER: 'He Was An Influence On Me More Than I Can Say'

TROUBLE singer Kyle Thomas has paid tribute to the band's former frontman Eric Wagner who died over the weekend at the age of 62.

On Tuesday (August 24),Thomas, who joined TROUBLE in 2012, released the following statement via social media: "Upon awakening yesterday morning to begin celebrating my wife's birthday with her, we were first met with news of the tragic loss of Eric Wagner. His passing ripped through the remaining artists and fans that had yet to leave Psycho Las Vegas. Just a few days ago I was hoping to see Eric and THE SKULL joining us all at the festival, and here we are now mourning his passing. So many tears followed, but more love and great memories eventually began to take over the conversations.

"Eric was one of a kind; a brilliant lyricist with a grand voice that was unmistakable. He was an influence on me more than I can say, and singing his songs will continue to be an honor as well as a pleasure. Although we had only properly met once, Eric reached out to me when I officially joined TROUBLE with encouraging and kind words. I cannot tell you what that means to me as a fan. But as someone that is always going to be under a microscope for occupying the spot where he once stood, it really meant a lot to me. I'll never forget that.

"I could go on and on, but I just want to wrap this tribute to one of my heroes up with some love. I want to send peace, condolences, and wishes of comfort for his family and closest friends. Thank you, Eric, for helping to bring us a soundtrack for our lives. And thank you for welcoming me into the TROUBLE legacy when you did. It made my ride much more enjoyable, please believe that."