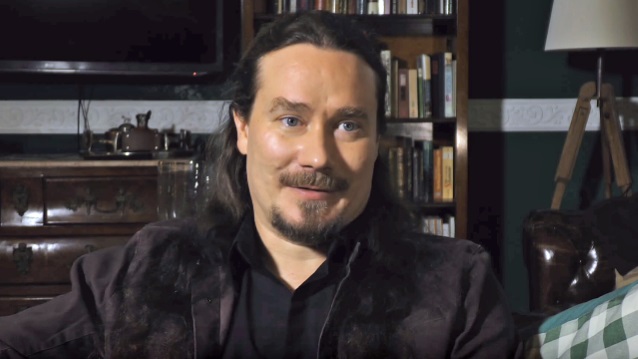 TUOMAS HOLOPAINEN On Next NIGHTWISH Record: 'I Have The Overall Concept Of The Album In My Head'

Holland's FaceCulture recently conducted an interview with NIGHTWISH mainman/keyboardist Tuomas Holopainen. You can watch the entire two-part chat below. A couple of excerpts follow (transcribed by BLABBERMOUTH.NET).

On the musical and lyrical direction of the material he has already composed for NIGHTWISH's next album:

Tuomas: "It's still really early. All I can say is that I feel really excited — super excited — for the first time in months, years. And I have six songs now — the music, not the lyrics — but I know what these songs are about. I have the overall concept of the album in my head and I'm really excited to present it to the other members of the band at some point. I feel a bit relieved also that it's back and that in the near future we're gonna be able to get back together with the band and start working on these songs."

On whether the business side of NIGHTWISH affects the way he experiences and approaches music:

Tuomas: "Not music itself. I still do music for the exact same reasons as I did 22 years ago. But it would be naïve to say that it doesn't change the dynamics of the whole monster at all. It does. It's become such a big thing that you can't really control it anymore in a way that you would like to. And I sort of let go years ago. I've never been a control freak — quite the contrary. I like to give everybody a lot of room, and I believe in [giving] everybody their place. I have no knowhow or interest in managing or selling shows or anything to do with the business and the money side. So you just need to find the perfect trustworthy people to take care of that crap, because nobody in the band wants to do that. So, okay, we have that fixed. I don't know how to play the guitar, so that's why we have Emppu [Vuorinen]. So everybody has their place. And in that way, I'm not a control freak at all, because I want these people to do their thing. But there are some things that I would like to be in control of, because it's NIGHTWISH, it's my brainchild, it's something that I like deeply. And then sometimes I see really weird compilation albums like all the best NIGHTWISH ballads one more time with [former NIGHTWISH singer] Tarja [Turunen], that nobody asked us [if we were okay with], and you see it there as an official release. It kind of sucks. So this is what I mean by not having control over anything anymore, and it's a bit tiresome."

On what makes the current NIGHTWISH lineup so perfect for him:

Tuomas: "I don't take it for granted, for one. Jus the past few years, the chemistry has been really good. I think you can see it on stage, you can hear it on the previous album. It's just really good at the moment. But, like I said, none of us takes it for granted; you have to work for it. And I hope everybody remembers that on the upcoming tour as well, and in the future."

A new NIGHTWISH 2CD compilation titled "Decades" will be released on March 9. The release will be accompanied by a nine-month tour across the globe. After kicking off with 34 concerts in North America in March-April, the journey will continue with dozens of European festival and headline shows. On this tour, NIGHTWISH will also be presenting a special setlist, featuring rare material from the early years of the band's career.