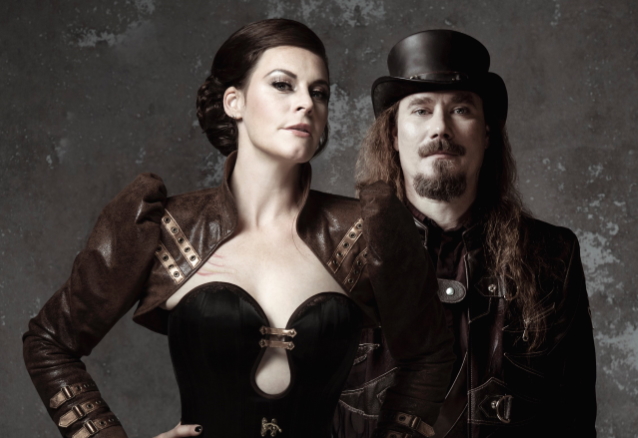 NIGHTWISH leader Tuomas Holopainen says that the band would split up if singer Floor Jansen ever chose to leave.

Holopainen, who formed NIGHTWISH in 1996 with guitarist Emppu Vuorinen and original singer Tarja Turunen, made the comment while discussing the recent departure of longtime bassist/vocalist Marko "Marco" Hietala.

Pressed by U.K.'s Metal Hammer magazine about his 2019 statement that NIGHTWISH would disband if another member opted to depart, Tuomas said: "That's how I felt back in 2019, and that's also how I felt when Marko left. I take my words back when it comes to that. But if it would be Floor leaving, that's it, it's the end of NIGHTWISH. Absolutely, 100%."

Asked how he would feel about the end of NIGHTWISH if the band called it quits tomorrow, he said: "If NIGHTWISH ends, it was a great run, a wonderful adventure of 25 years. Then I'd just have to come up with something else."

In 2019, Turunen dismissed Internet chatter about her possible return to NIGHTWISH after her December 2017 onstage reunion with Hietala during a "Raskasta Joulua" concert in Hämeenlinna, Finland.

"I know a lot of fans would love to see something happen, but it's a very long distance away," she told Kerrang! magazine. "Personally, I don't see anything happening with me and them, to be perfectly honest. Marko came a little later into the band; he wasn't there since the beginning. He was always a guy I was close to. Me and Tuomas Holopainen, however, haven't seen each other in a long time… but we have been in touch. It's not bad. The past is what it is; we can't change that. We can only change the future."