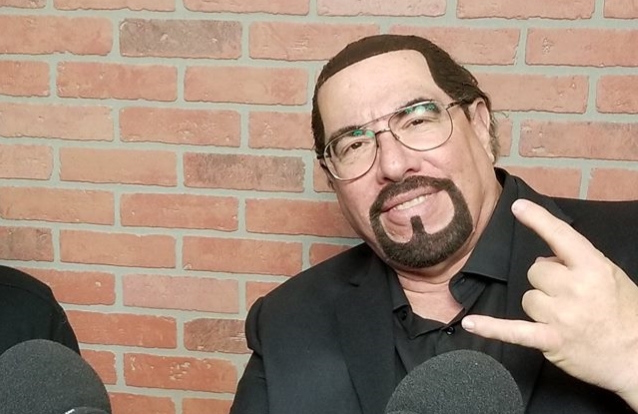 Mark "The Animal" Mendoza, famed bassist from TWISTED SISTER, BLACKFOOT and THE DICTATORS, has released "Deck The Halls", a holiday cheer music video, with his new band, ANIMAL TACTIX.

ANIMAL TACTIX is Mendoza on bass, Jared Cannata on lead guitar and Jordan Cannata on drums. An impressive list of singers will contribute their vocals to upcoming tracks consisting of original hard rock music.

"Never forget your fans," stated Mendoza in an interview on his Area 22 Productions project.

"The Cannata brothers and myself were scheduled to launch ANIMAL TACTIX early 2019. We decided to move up the date to give our fans a holiday cheer and a taste of what's to come."

Asked by The Front Row Report, what stands out to him about TWISTED SISTER's four-decade career, Mark said: "We were broken up for about 13 years in the middle of it all. You know that. What stands out? I have to say, and I'll put it in different terms instead of music and rock and roll, what I want to say about this. I would say Dee [Snider, vocals] is the best quarterback in the business. Hands down, he is the best quarterback, and he has the best linemen in the business; [I] don't want to forget them. And I'll be egotistical about it, and I'm not egotistical; I'm not that type of person. We take apart every audience and we take apart every band that we play with. It's the combination of those people and that name, and the fact that we're a well-oiled machine that has been doing this for a long time. No circumstances, no anything, even A.J. passing, can stop us from doing what we love to do and getting the job done. And we get it done, obviously, every single night that we play."

He continued: "You can't be liked or loved by everybody, every music fan. It's whatever floats your boat. I mean, it's whatever you like, and there's people that don't like rock music who want to hear jazz or they want to hear country, you know, [or] they want to hear rap. You know, music is very subjective. It's whatever floats your boat. It's whatever makes your heart beat. Whatever kind of music it is, so can you claim to be the best band in the world? Well, you can if you're in the band, but does it really mean you're the best? We go by what all the reviews around the world say, and what every promoter and what every other band says on the bill with us. At the end of the show, we get, 'Holy crap! You guys turned this audience into fanatics.' So there isn't a single night that we don't conquer whatever situation we're in as a band."