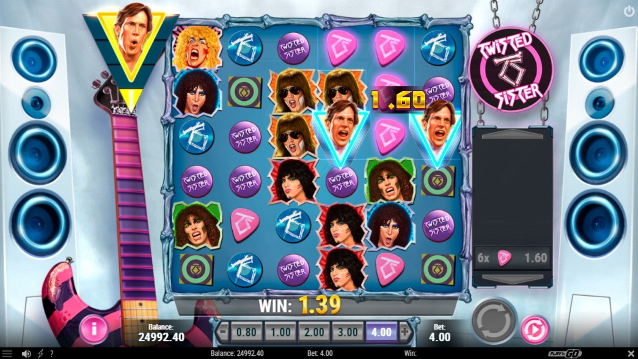 Swedish firm Play'n GO, one of the most well-known online slot game providers, has released another title into the market, a collaboration with famed American rock band TWISTED SISTER.

The band reached worldwide acclaim during the 1980s with their album "Stay Hungry", and the game is a cascading gridslot based around two of the biggest hits from that album, "I Wanna Rock" and "We're Not Gonna Take It".

As has become the trademark for Play'n GO collaborative titles, the narrative of the game is strongly linked to TWISTED SISTER and their material, including a free round called "We're Not Gonna Take It", inspired by the lyrics and music video of the track. This is coupled with a host of special features for each of the band members represented during the game.

The game continues on the company's progression with their music slot catalog and, following on from the last release, Annihilator, makes use of quality in-game animation to add an extra dimension to the gameplay, particularly during the free round.

TWISTED SISTER had an incredibly unique look and style, which has been translated into the game's theme and design, something that CPO Martin Zettergren feels lent itself well to being transformed into a slot title.

"Their distinctive style of music has allowed us to create a game with innovative features, meaning it will appeal to fans of quality slot entertainment, as well as fans of the band," he says. "There's something for everyone."

In 2016, TWISTED SISTER embarked on one final trek, titled "Forty And Fuck It", in celebration of its 40th anniversary. These shows featured the band's "core lineup" of Snider, guitarist Jay Jay French, guitarist Eddie Ojeda and bassist Mark Mendoza, along with drummer Mike Portnoy. The band's last-ever concert took place in November of that year — 20 months after the passing of TWISTED's longtime drummer A.J. Pero.