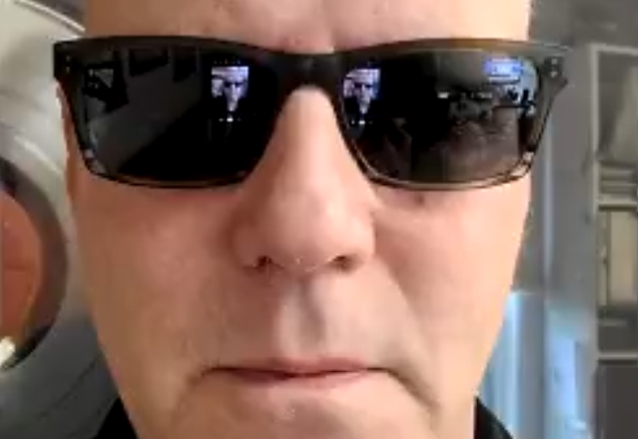 TWISTED SISTER Guitarist Delves Into Podcasting With 'The Jay Jay French Connection: Beyond The Music'

In the nearly 50 years since founding heavy metal institution TWISTED SISTER, John "Jay Jay" French has sold over 20 million records, collected 37 gold and platinum albums, headlined many of the world's largest music festivals in 38 countries, and now is now adding podcasting to his resume with "The Jay Jay French Connection: Beyond The Music".

"What makes my podcast stand out is the close personal relationships that I have with most of my guests," French says. "This allows them a kind of safety zone where they will tell me stories and experiences that you just won't hear anywhere else."

On "The Jay Jay French Connection", French brings an enormous wealth of knowledge that stretches beyond music business. His natural curiosity results in wide-ranging conversations with a variety of well-known musicians, authors, actors, wrestler/musicians, managers, celebrity chefs, TV and movie directors and writers.

Highlights of previous episodes have included:

* Drummer Mike Portnoy discussing replacing AJ Pero in TWISTED SISTER and his never-ending list of projects.
* Vocalist Rob Halford revealing information on his new autobiography and what scared him the most about coming out.
* Singer/radio personality Dee Snider on everything TWISTED SISTER.
* Guitarist Nuno Bettencourt telling the story of the story of how EXTREME got their name and how his playing has evolved.
* Guitarist Joel Hoekstra about future plans for WHITESNAKE, the effect of the pandemic and his own solo projects.
* Guitarist Elliot Easton talking about the death of Ric Ocasek, the history of THE CARS and his new band THE EMPTY HEARTS.
* BEATLES book author Andy Babiuk on the challenge of bringing new stories and never-seen photos of THE BEATLES' recording and performing gear to the millions of BEATLES fanatics worldwide.
* Filmmaker Frank Marshall discussing his incredible producer/director history in Hollywood and his new hot BEE GEES documentary, "How Do You Mend A Broken Heart".
* Celebrity chef, music fanatic, guitar player, current managing partner and executive chef at NYC's number one Steakhouse Porterhouse Michael Lomonaco recalling how a last-minute decision to get his eyeglasses fixed saved him from perishing at his restaurant, Windows On The World, on the 107th floor of the World Trade Center on 9/11, and his thoughts on the devastating effect of COVID-19 on the New York restaurant industry.
* Professional wrestler and vocalist Chris Jericho hyping on his movie which tells the true story of a local metal band, retired for four decades, who returns to perform at a German metal festival.
* Television writer Brian Koppelman discussing his latest hit show, the Showtime series "Billions", how he discovered Tracy Chapman in college and transitioned from record executive to screen writer/producer/director.
* Singer/songwriter Don McLean dishing on the little-known secrets of his massive hit song "American Pie".
* Singer Johnny Lee talking about getting a new record deal at the age of 74, 40 years after his biggest hit, "Lookin' For Love In All The Wrong Places", and how modern country radio feels about its legends.
* Music industry exec Gary Spivack revealing information on his "Long Live Rock" documentary, a love letter to the contemporary live rock scene, and his belief that it is thriving.
* Hit songwriter Nate Cyphert (Florida Georgia Line's "H.O.L.Y.", among many others) on what it takes to write Grammy-winning, multi-platinum hit songs in today's pop market.
* Author Jenny Boyd on her new book "Jennifer Juniper", being the muse for Donovan's hit song "Jennifer Juniper", living with THE BEATLES in Rishikesh, India, living in London in the "Swinging Sixties," being married to Mick Fleetwood of FLEETWOOD MAC and having sister Pattie married to both George Harrison and Eric Clapton.
* Best-selling British "chick lit" author Jane Green telling the story of how her professional life and career evolved. All aspiring writers need to hear this one!