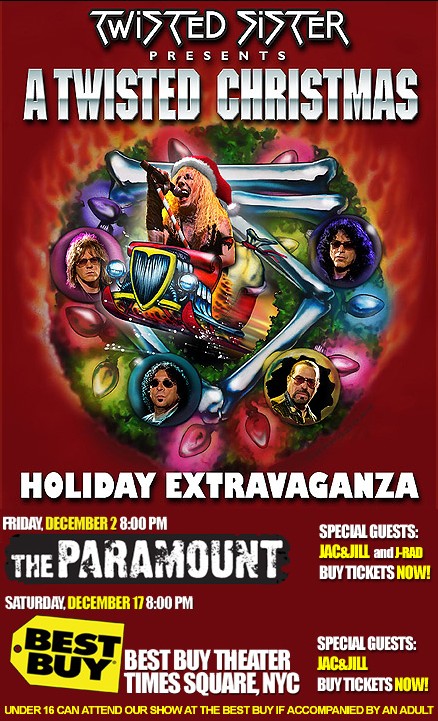 Fan-filmed video footage of TWISTED SISTER's December 17, 2011 presentation of "A Twisted Christmas" — a theatrical holiday extravaganza like no other — at Best Buy Theatre in New York City can be seen below.

Photos of the concert are available at PowerlineMag.com (all pictures by Frank White).

Dee Snider, Jay Jay French, Mark Mendoza, Eddie Ojeda and A.J. Pero have crafted this show into a hell-raisin' holiday tradition. In the past, they've had such wildly disparate personalities as Lita Ford, Mick Foley, and MINIKISS join the onstage festivities. You never know who will crash this NYC party!

After the release of 2006's "A Twisted Christmas" album (hailed by the Associated Press as "[one of] the best hard rock Christmas album[s] ever made, and one of the best rock 'n' roll Christmas albums — period — since Elvis made his"),TWISTED SISTER brought the metal merriment to the stage. They have continued to give these Yuletide anthems a TWISTED treatment ever since.

"If you told me 30 years ago that one day I would be playing Christmas songs, with TWISTED SISTER, for families in concert — and be happy about it — I would have punched you right in the nose," says TWISTED SISTER frontman Dee Snider. "Funny how life changes you. Now I'm actually looking forward to it!"

Added guitarist Jay Jay French: "There is no better way to blow your Christmas bonus than by seeing 'A Twisted Christmas' on Broadway. It's so good, even atheists love it!"

The celebration doesn't end there! For a taste of what's in store, fans should check out "Twisted Xmas: Live In Las Vegas", exclusively featured on the band's brand new eight-hour-plus boxed set, "From The Bars To The Stars" (Eagle Rock Entertainment). It's the perfect stocking stuffer for any metalhead, naughty or nice!