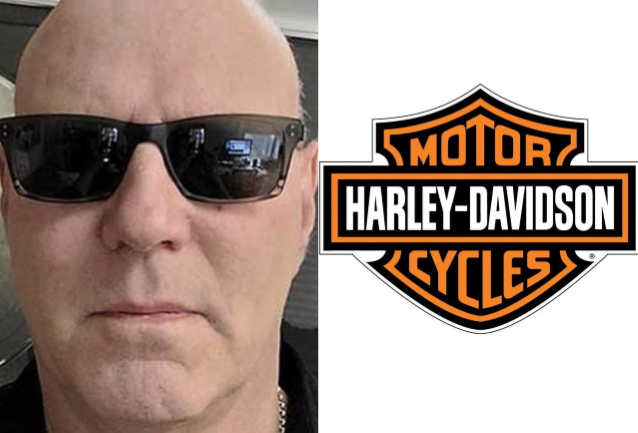 In a recent interview with Joe Rock, TWISTED SISTER guitarist Jay Jay French revealed that he once threatened legal action to prevent iconic motorcycle maker Harley-Davidson from using the TWISTED SISTER name in connection with one of its products. He said (as transcribed by BLABBERMOUTH.NET): "There were so many attempts to use the trademark, and I had to sue everybody — I had to keep suing people 'cause I have the trademark. And I got a phone call one day from a guy representing Harley-Davidson. He said, 'We wanna name our tire 'Twisted Sister', and we did our due diligence and found out you own the trademark. And we're calling you to let you know we're gonna use the name and we're gonna call the tire 'Twisted Sister'.' And I said to him, 'Are you really just calling me to tell me you're violating my trademark?' I was dumbfounded. I said, 'You're really calling me up, telling me you acknowledge I own the trademark, you're telling me you don't care that I own the trademark 'cause you're Harley-Davidson with 400 million dollars' worth of assets, and then you're gonna call a tire 'Twisted Sister' and you're gonna send me a couple of tires as a thank you. That's what you're saying to me, right?' And he says, 'Yeah.' And I said, 'Give me your numbers.' I take his number down. I hang up the phone and I'm just fucking livid. And I called [him back] and this is what I said to him. I said, 'Hey, man. Jay Jay French [here]. You know the phone number you called to reach me is a 212 number.' He goes, 'Yeah.' I said, 'You know what that means, don't you? I'm a New York guy. In fact, I'm a New York Jew.' That's what I said to him. I said, 'So this is exactly how this is gonna go down.' I said, 'Number one, I sued Six Flags and won.' He went, 'What?' I said, 'Yeah. And they're twice as big as Harley-Davidson. And I took 'em to court for three years and I won. Did you do the due diligence on that?' And he said, 'No, I didn't.' And I said, 'Well, you should do due diligence on that. Because I also took Urban Decay down.' And I said, 'So this is how it's gonna go down. If you fuck me like this, the first thing I'm gonna do is I'm gonna sign a band and call 'em the Harley-Davidsons. I'm gonna send you a couple of guitar picks and a fucking thank you.' And he said, 'How much do you want?' I said, 'I want 10 percent and two Fat Boys [motorcycles] a year.' … And I hung up on him. And he called me back the next day. He said, 'We've rescinded our use of the name.' And that was the end of that."

Back in 2013, the owners of the Twisted Sister House Of Hunger food truck in Minneapolis, Minnesota were forced to change the name of their business after they were threatened with legal action by French. In a cease-and-desist letter, French and his attorney wrote, "It is the opinion of our client, with which we concur, that your use of the name Twisted Sister will cause dilution of our client's famous mark and will cause confusion among consumers." In response, the proprietor of the food truck said, "I don't know how somebody can get a 20-foot aluminum box mixed up with an '80s rock band. We never refer to ourselves solely as Twisted Sister — we're in the food industry, not the entertainment industry." In the end, the food truck owner decided it wasn't worth the time or money of a court trial. He spent about $3,000 changing the company's name to House Of Hunger, but everything else stayed the same.

Addressing criticism from fans and other observers regarding TWISTED SISTER's decision to initiate the name dispute, French said in a statement at the time: "I get how stories like these appear like David vs. Goliath. I also get how easy it is to take cheap shots at my band because of our former image and the '80s-era MTV iconography. The fact of the matter is that trademark law doesn't give me a choice on who and what to defend. The law is very clear: either defend your trademark or lose rights to it.

"Over the last 35 years, I have defended my trademark against the biggest companies (Six Flags, Urban Decay, Harley-Davidson) as well as dozens of mom-and-pop companies," he continued. "The defense is almost always the same. They first claim that they never heard of the band and then they say that no one would confuse the two anyway. I have won every case. The unique juxtaposition of the words 'Twisted' and 'Sister' have never ever appeared in print prior to my band's use of it. This was established in the Six Flags case. The name is so unique, like LED ZEPPELIN, that any use would confuse the marketplace as either the product or service is owned or endorsed by us. Also, if I let one go, that just emboldens someone else with the rationale that 'you didn't bother them, so why go after me.' I have heard this many times before.

"When my band first started, we thought of calling ourselves 'THE MAX FACTOR.' it was a cute idea because we were a 'glam band.' My lawyer at the time then said to me: 'This is a bad idea for two reasons, 1. You will probably be sued for trademark violation and 2. Why would you want to trade on someone else's idea? Think of something original and unique, that way, should you succeed, you will be able to take credit for your own special creation.'

"I really don't understand why people feel the need to steal someone else's property," French added. "Perhaps they are just lazy. I think that the real reason they used our name and didn't call it The Beatles, Rolling Stones or Motley Crue House Of Hunger is that they knew that they would get sued and perhaps thought that we wouldn't notice.

"I believe in the American way of 'roll up your shirt sleeves' entrepreneurship. Be proud of your hard work and ingenuity. Be proud of being unique. Provide a service like we did that people love.

"I only wish for these guys to have this kind of success where you start from nothing, zero, against all odds and have a real career. Just please do it on your own terms, with your own ideas, providing a great product or service, just don't steal from others. That is not the American way.

"As you can see, I am proud of what we have created. We have learned that being original, true to yourself, working hard and giving back pays off in ways that one can't even imagine."