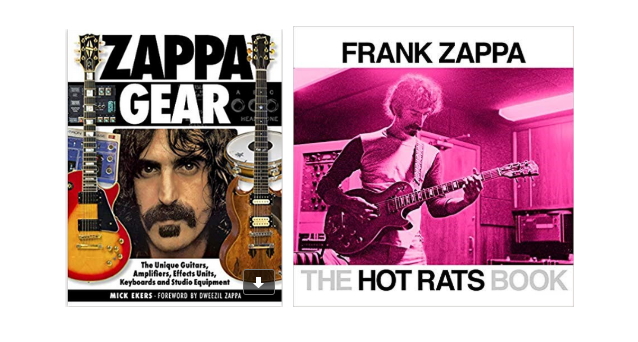 "These books provide another way for fans to connect with Frank Zappa," Ahmet Zappa says. "They give a fascinating window into Frank's mind and the ideas he came up with throughout his career."

First up, the November 29 release of "Zappa Gear: The Unique Guitars, Amplifiers, Effects Units, Keyboards And Studio Equipment". "Zappa Gear" offers an unprecedented inside look at the machinery behind the legendary music. In addition to a detailed presentation of the equipment, "Zappa Gear" also introduces some of the pioneering inventors, engineers, and entrepreneurs without whom the instruments would not exist.

Frank Zappa was an unremitting musical innovator and experimenter, always looking for ways to exploit the latest advances in technology. His working life coincided with the explosive development of music technology that ran from the 1960s through the following three decades. Without such inventions as the Marshall amplifier, the Gibson SG, the wah-wah pedal, and the Synclavier — much of it modified to Zappa's requirements and used in ways for which they had never been designed — Zappa's "air sculptures," as his music has been described, would have had a significantly different shape and texture. Lavishly illustrated, the book includes over 180 unique photographs of Frank Zappa's guitars and equipment taken by the author at Zappa's UMRK studio in Los Angeles. "Zappa Gear" is an official Frank Zappa book produced and written with the full cooperation and endorsement of Gail Zappa and the Zappa Family Trust.

The following month will see the release of "The Hot Rats Book", out December 15. To celebrate the 50th anniversary of the much-loved "Hot Rats" LP, Ahmet Zappa and the Zappa Trust have teamed with Backbeat Books and Bill Gubbins, the only photographer to document the "Hot Rats" sessions, to create "The Hot Rats Book", a deluxe, commemorative book packed with never-before-seen photos and an interview between Ahmet and Gubbins documenting the "Hot Rats" sessions and last U.S. show of the original MOTHERS OF INVENTION on August 10, 1969 at Cleveland's Musicarnival in Warrensville Heights, Ohio. "A movie for your ears" is how rock icon Frank Zappa first described his album "Hot Rats", which remains, 50 years after its release, not only one of Zappa's most critically acclaimed and commercially successful albums, but a stunning tour-de-force of the totality of his musical genius and legendary skills as a composer, lyricist, producer, arranger, studio innovator and virtuoso guitar player. "The Hot Rats Book" is an official Frank Zappa book produced and written with the full cooperation and endorsement of the Zappa Trust.

About Ahmet Zappa: Ahmet Zappa, the second son of Frank and Gail Zappa, is, in addition to being a co-trustee of the Zappa Family Trust, a successful entrepreneur, New York Times best-selling author, and film and television screenwriter and producer.

About Mick Ekers: Mick Ekers is a lifelong Frank Zappa enthusiast, first seeing the original MOTHERS OF INVENTION at the Royal Festival Hall in London in 1968. A musician and self-confessed equipment geek, in the 1970s he worked as a sound engineer and also sold sound equipment and early synthesizers.

About Bill Gubbins: Bill Gubbins's photographs have appeared in the New York Times and Rolling Stone and have been exhibited in the United States (Detroit, Nashville, Philadelphia, and soon, Los Angeles) as well as internationally (Bad Doberan, Germany; Klagenfurt, Austria). Gubbins had just turned 19 when Zappa invited him to document the "Hot Rats" sessions after being interviewed by him following the Musicarnival show.

About Backbeat Books: Since 1991, Backbeat Books have been favorites among passionate music fans and musicians own for their depth, spirit, and authority, Backbeat offers a diverse range of books — from biographies and memoirs, critical examinations and histories, to authoritative volumes on musical instruments and instruction — covering all areas of rock 'n' roll, jazz, and beyond.