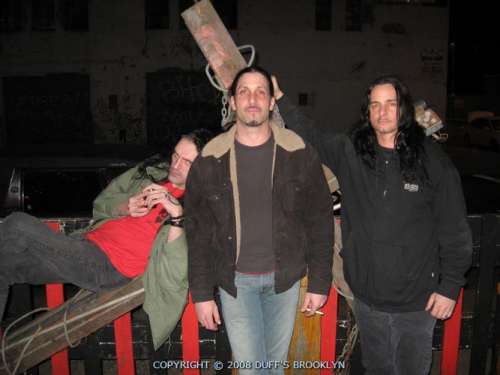 TYPE O NEGATIVE has donated the massive cross (photo) that frontman Peter Steele was "crucified" on in the original "Christian Woman" video to Duff's Brooklyn — the heavy metal bar located at N. 3rd St & Kent Ave in Williamsburg, New York. According to a posting on the Duff's web site, Peter, Johnny [Kelly, drums] and Kenny [Hickey, guitar] brought it over in Johnny's truck, and we somehow managed to get it up on the porch. It wasn't an easy task, considering the motherfucker weighs a ton, or, in this case, a T.O.N. Per Peter's request, we do have plans to do something special with it. It's going to take some engineering and hard work, but we'll get to it."

TYPE O NEGATIVE will release two special editions of its acclaimed new album, "Dead Again", on February 12. The deluxe CD version will contain a bonus DVD with exclusive live performances, interviews and studio videos. The discs will be repackaged in a special red cover. A limited-edition triple-vinyl box set will also be released and features "Dead Again" on high-quality 180-gram vinyl. The vinyl box set will contain the bonus DVD, along with an exclusive t-shirt and mp3 files of the album.