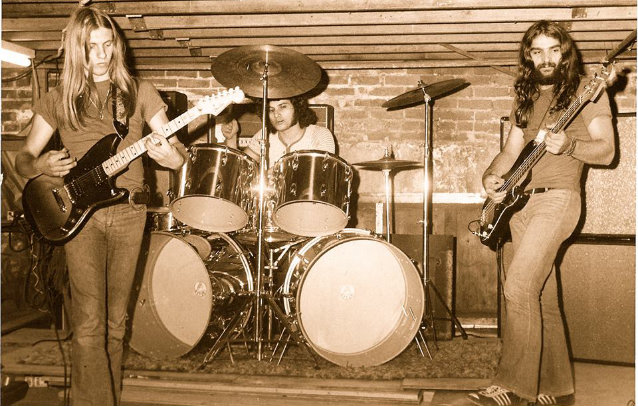 Often called America's answer to BLACK SABBATH, one of the most unsung bands in the history of U.S. hard rock music, BANG, is back! With the heaviness of BLACK SABBATH and LED ZEPPELIN, coupled with the groove of GRAND FUNK RAILROAD, BANG released three critically acclaimed albums on Capitol Records in the early 1970s before disappearing into obscurity for a number of years. Says original drummer and founding member Tony Diorio, "Basically, we're back to finish what was started a long time ago and cut short by forces out of our control."

The 1971 self-titled debut album, "Bang", is considered an important forerunner to the early doom metal genre. Undoubtedly one of America's heaviest "proto-metal" bands from the period, BANG also had a strong sense of melodic power. The band's versatility and songwriting skills are second to none. Highly regarded as a cult act by many for years, it's now time for this truly amazing rock band to be enjoyed by a new audience worldwide!

Back in the spring of 1972, BANG was shaping up to be the proverbial "next big thing." Signed a few months earlier to Capitol Records, the band's first single, "Questions", was taking off in the Billboard Hot 100. With the enthusiastic support of their record label, the trio's self-titled debut album was also climbing in the charts. The group's management had them opening shows for just about every major band of the era. Moreover, BANG had recently opened for their all time favorite band BLACK SABBATH, and by common consensus of opinion, stole the show! With two band members, guitarist Frank Gilcken and lead singer/bassist Frank Ferrara, still in their teens, and drummer/lyricist Tony Diorio, BANG seemed to be unstoppable!

Somehow, though, it didn't quite work out. Even as "Questions" was charting, a corporate shakeup at Capitol saw the band's supporters moving on and replaced by A&R men who had their own signings to promote. With the band's producer, Michael Sunday, also leaving the label, BANG's support system was crumbling. Their new producer engineered a change in personnel that led to drummer/lyricist Tony Diorio's departure. Meanwhile, the label insisted that BANG develop a more mainstream, pop-oriented sound. Trying to keep the dream alive, they changed management companies, only to discover that they were being blacklisted, making gigs scarce. With a much more commercial approach, the group released a third album, "Bang Music", in 1973, which, although did contain some great songs and performances, failed to chart. By 1974, just a couple of years after their initial success, a tired and disillusioned BANG had lost their direction, momentum and self-belief. They went their separate ways.

Despite the relative briefness of their career, BANG left behind a powerful recorded legacy: four albums, including their unreleased 1971 concept album "Death Of A Country", as well as a trio of non-album tracks that were recorded as singles when their deal with Capitol was about to expire. In 1996, much to everyone's surprise, BANG reunited! The band recorded and released in 1998 a new album titled "Return To Zero", with the more metal-oriented album titled "The Maze" (featuring new versions of old favorites "Love Sonnet" and "Bow To The King") following in 2004, proving once again that the band still had the magic that made them great back in the early '70s!

And now, much to the excitement of their fans, BANG is preparing to play live in 2014! The group is currently rehearsing for shows in the New Year. Says Tony, "We will be webcasting all our shows and fans can sign up in our forum to be notified of dates." Frank Ferrara adds, "The three of us realized that BANG was still a musical force. And even though a lot of years have passed, we were writing songs as if it were yesterday. The dream is alive, and with renewed thirst and love of the music, we are resuming our quest." With drummer Matt Calvarese, and the Franks, the band will remain a three-piece, sounding just like the records!