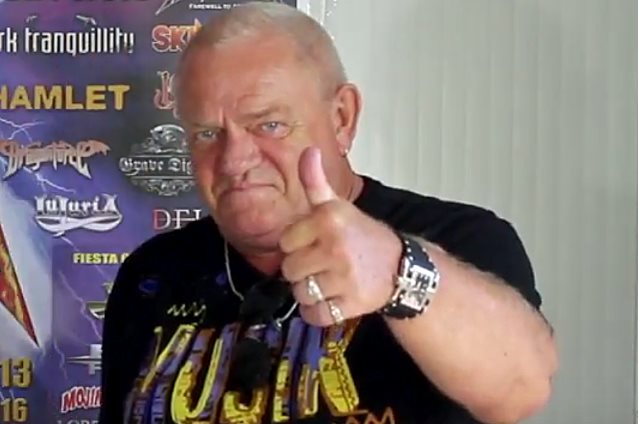 UDO DIRKSCHNEIDER: 'I Never Left ACCEPT - They Fired Me'

EMP Live last year conducted an interview with former ACCEPT and current DIRKSCHNEIDER and U.D.O. vocalist Udo Dirkschneider. You can now watch the chat below.

Speaking about his 1987 exit from ACCEPT, Udo said: "I never left ACCEPT. That's a very important point. They fired me. That's a very important thing. It's very interesting to be fired [from] your own band. I was creating ACCEPT, and then, in the end, they said, 'We wanna do more commercial stuff. Blah blah blah' — like this. And then I started U.D.O. And in the meanwhile ACCEPT, for me, is, let's say, far away."

Asked what he would say if he was offered a chance to rejoin ACCEPT, Udo said: "No. It's very simple to say 'no.' [Laughs]"

Dirkschneider also talked about his replacement, Mark Tornillo, who joined ACCEPT in 2009. Udo said: "He has a good voice. He's singing different. I think he got, let's say… be honest — I think he has problems to sing the old songs. It's no so easy for me. I mean, I know that. I was watching one concert."

Asked what it was like to see his old band perform without him, Udo said: "It was funny. I was interested. I mean, of course, I can watch it on YouTube, but, for me, it was interesting to see this. And I was watching a show in Hamburg [in October 2014], but I told nobody; I was just sitting in the back. But the people recognized me. [They were], like, 'What are you doing here?' 'I wanna watch ACCEPT.' But I think he's doing, in a way, a good job. He tries to sing it well. I think they're working now also on a fourth album [with Mark], a new one, and they don't play that much old ACCEPT stuff — just a couple of songs."

DIRKSCHNEIDER"Back To The Roots - Farewell To Accept" tour, which kicked off last year, sees him playing classic ACCEPT songs for the last time.