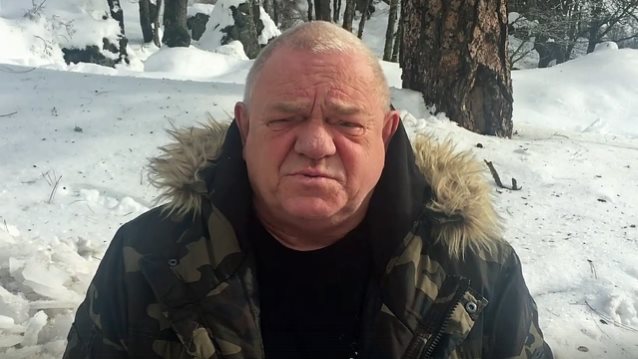 On January 10, Alex Stojanovic of Metal Master Kingdom conducted an interview with former ACCEPT and current U.D.O. and DIRKSCHNEIDER frontman Udo Dirkschneider at The Mod Club in Toronto, Ontario, Canada. You can watch the full chat below. A few excerpts follow (transcribed by BLABBERMOUTH.NET).

On if he envisioned doing a full world tour playing ACCEPT songs:

Udo: "[This] was not planned, then it got longer and longer and longer. When we are finished with the American tour, then we are at 100, or maybe 120 shows, then we go into the studio to work on the next U.D.O. album. We will do some more festival shows over the summer. Of course, it takes a lot for a new U.D.O. album to come out, but if I want, I can continue with this tour. I don't know. But it's good to see that people like it. That means, for me, in a way, it's what the people want to see. What can I say? I'm really happy. For me, it's now time to say 'I have to close the book.' I'm also a little bit tired of all this comparing who's playing the songs better, classic ACCEPT, or U.D.O. Now when the people want to hear some ACCEPT songs, they can go to ACCEPT."

On the ACCEPT songs he enjoys singing the most:

Udo: "You can see from the stage there a bunch of people who like 'Neon Nights', 'Princess Of The Dawn', 'Metal Heart', most of all, and 'Fast As A Shark'. In a way, what I'm doing is all the classic ACCEPT songs. Some songs like 'Wrong Is Right' I never played with ACCEPT, which is from the 'Metal Heart' album, and also 'Midnight Highway' we didn't play very often. But the people really appreciate what I'm doing with the classic songs. It's really hard to put a setlist together, so, of course, some people come up 'Why aren't you playing this song or this song?' If I want, I can make up another setlist."

On having his son Sven play drums in U.D.O.:

Udo: "When Francesco [Jovino] was leaving, I had auditions with a lot of drummers, but at this time, my son was [sitting in] for a couple of shows for Nigel [Glockler] from SAXON. I was with the guys in SAXON in Berlin, and I said to Biff [Byford], 'Shit, I have to look for a new drummer.' He said, 'Why are you not taking your son?' I wasn't really sure about it. But I knew that he was a really good drummer. But the family thing in the band, blah, blah, blah and so on. Then I asked my son, 'Can you maybe be the drummer U.D.O.?' He didn't say 'Yes' right away. He took three or four weeks to think about it. I said, 'Come on!' I knew that he was rehearsing like hell. For him it was very important–he told me this afterword–that he could play all of this stuff. Then he did the 'Decadent' tour with us perfectly. He's done a great job on all the ACCEPT stuff."

On ex-U.D.O. and ACCEPT guitarist Stefan Kaufmann's role with the band:

Udo: "He is the director of the upcoming DVD. He's more into video stuff. For this tour, for all the ACCEPT stuff, he was in the rehearsal room showing the guitar players the notes and showing my son some special things on the drums. Now, we are still really good friends. He's working a little bit behind the scenes and coming up for the U.D.O. album with some songs, I don't know. He's always writing songs, so we will see. Some people have asked if we had a fight, but no."

On if he's working on any new U.D.O. songs during the tour:

Udo: "Sometimes we have a jam [session] going on during soundcheck. We have some ideas, then we record them very quick. Also at home, we've already been working on some ideas, not finished songs, but we have tons of ideas at the moment. We're starting at the beginning of March with all the ideas, so for two or three weeks we'll do pre-production and all of the arranging. Then we'll see in the end, we'll have 16 or 17 songs we'll want to record."

DIRKSCHNEIDER released a live album called "Live - Back To The Roots" on October 28, 2016 via AFM Records. The effort, which was recorded on April 2, 2016 at Kaminwerk in Memmingen, Germany, was made available as two-CD digipak and gatefold three-vinyl in four different colors (black, gold, silver and clear).