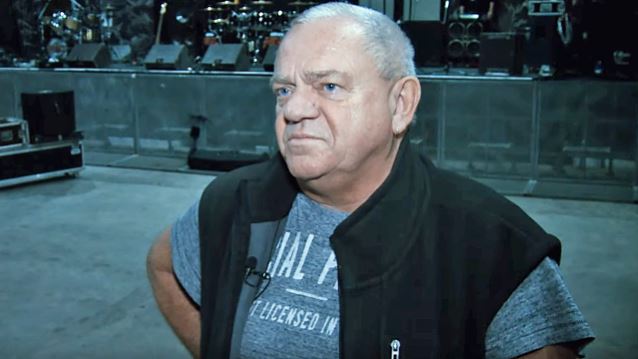 Asked what he would say if he got a phone call from ACCEPT guitarist Wolf Hoffmann or bassist Peter Baltes asking him to play one last show with the band, Udo said: "If Peter and Wolf called me, but I don't think [they would], but [if they did], I would say, 'Have fun. Bye bye.'"

Udo recently told Spark TV about his current relationship with the members of ACCEPT: "There is no relationship at all. We don't talk to each other. It's, in a way, also sad, but what can you do?"

Dirkschneider also gave his opinion of ACCEPT's musical output with current singer Mark Tornillo. He said: "I don't know really the whole albums; I know a couple of songs. I mean, I think they did very good albums, they had, in a way, quite a good success, and the singer is not bad. I mean, I think he's got a little bit of problems when he has to sing the old stuff, but, I mean, come on, this is normal. To copy me really, it's not so easy, but I think he's doing a good job. And, yeah, we will see what they are doing, you know. I mean, I wish them all the best. And that's it."

Dirkschneider in February embarked on a special tour during which he is performing ACCEPT songs one last time before he closes the chapter for good.

The April 2 DIRKSCHNEIDER concert at Kaminwerk in Memmingen, Germany was professionally filmed and recorded for a DVD and CD release later this year.

U.D.O.'s latest studio album, "Decadent", was released in Europe in January 2015 via AFM.