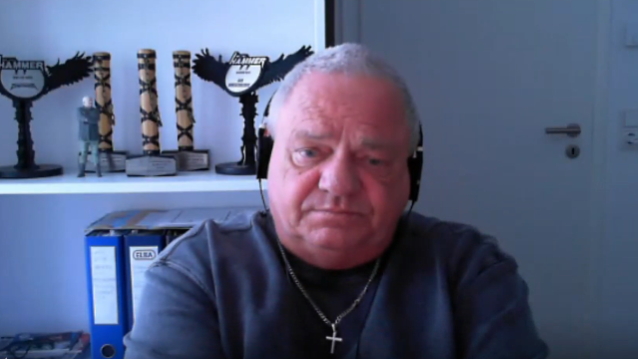 UDO DIRKSCHNEIDER On Russia's Invasion Of Ukraine: 'I Don't Know What Kind Of Drugs' PUTIN Is Taking

Former ACCEPT singer Udo Dirkschneider, who has enjoyed great popularity in Russia for most of his career, weighed in on the country's invasion of Ukraine in a new interview with Belgian Jasper. He said (as transcribed by BLABBERMOUTH.NET): "This is a really bad feeling, I tell you. Normally it was planned that we do another really long tour in Russia and Ukraine in October. Okay, Ukraine is definitely not possible, and Russia will be possible, but I don't wanna do that. We canceled… All the bands are canceling all the Russian dates. This is impossible.

"I feel sorry for the fans, of course. I think at the moment, definitely it takes a while before you can do something like a tour again in Russia," he continued. "I don't know. I don't see this, not before 2024 or something like that — maybe. You never know what's coming. The war is still going on.

"And also, my guitar player [in U.D.O. and DIRKSCHNEIDER], Andrey [Smirnoff], he is Russian, but he was living already for eight years in the Ukraine. And luckily yesterday he arrived in Germany. He [was] driving through the whole Ukraine. Everybody was, like, 'Well, Jesus, hopefully it works.' And so yesterday evening he arrived in Germany with his whole family. And thank you. That was, for us, more personal, the whole thing also. It's not like, okay, watching TV and seeing what's going on. This is already a nightmare. But to have somebody there and to get him out [of] there, that was, like, 'Phew.' Especially one of my main guitarists — I mean, [he's been in the band] for 10 years now. It's, like, 'Oooh.' But finally it works."

He added: "But the whole situation, it's still… I have no words for this. It's, like, why? Why? Why they do this? They are destroying Ukraine. Why? They are not [posing] any danger to Russia. I don't know what kind of drugs this guy takes in Moscow," he said, apparently referring to Russian president Vladimir Putin. "Hopefully it's not getting worse."

Udo is currently promoting his upcoming album, "My Way", which will be released on April 22 via Atomic Fire Records. Billed as "his most personal and extraordinary album to date," the effort contains 17 cover versions of the very songs that have influenced the musician and singer the most. All kinds of classics from music history are among them — including those that you might not expect from Udo.

Seven years after announcing that he would embark on a special tour during which he would perform ACCEPT songs one last time under the DIRKSCHNEIDER banner before closing that chapter for good, Udo is continuing to play ACCEPT material at select shows.

A year ago, Udo confirmed to Canada's The Metal Voice that U.D.O. will "definitely" play some ACCEPT songs if the band's North American tour materializes in 2022.

Dirkschneider said in 2016 that his vow to never play ACCEPT material again came with one caveat. "If the band ACCEPT dissolves one day in the near future and I am still around with U.D.O., then there is a chance that I put ACCEPT songs back in the setlist," he said. "But currently there is ACCEPT, so go see them [if you want to see those songs performed live]. They are playing these songs."

Udo previously said the original plan was for DIRKSCHNEIDER to only "a few shows," and "then [the tour] got bigger and bigger [due to demand]." But, he added, "I don't want to complain about that."