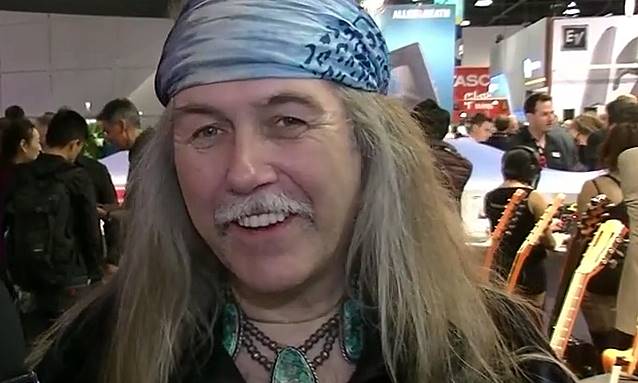 VintageRock.com conducted an interview with legendary guitarist Uli Jon Roth (SCORPIONS) at this year's NAMM (National Association Of Music Merchants) show, which was held January 23-26 at the Anaheim Convention Center in Anaheim, California. You can now watch the chat below.

Uli last year completed a tour commemorating the 40th anniversary of his joining the SCORPIONS.

In a recent interview with Patrick Prince of Powerline, Roth stated about the SCORPIONS songs that he performed on the recent tour: "It is mostly the stuff that I've written or my favorites from then. I was involved in virtually every track back then, even if there's not a writer's credit. Very often I would contribute quite a lot of things to it — the guitar leads or whatever. We're playing a track like "In Trance", for instance, which was written by Rudolf (Schenker) and Klaus (Meine),but then again, the way I wrote the guitar parts for many of Rudolf's songs they somehow feel like a composition within a composition and those parts came from me. These songs wouldn't have the same feel without them. Back then I could have had co-writer's credits for these, but it didn't seem important. I'm playing long sets anyway. We're doing other stuff as well but in every show we'll include several pieces from every SCORPIONS album that I've played on."

He added: "I take this tour very seriously — also because we're recording it and we're going to be doing a live double album. So I want to come up with something that's at least kind of, like, from my point of view, the definitive version of these tracks for what I can do now. And that means, yes, we have rewritten certain sections and I've even rewritten certain pieces of lyrics a little bit. Expand certain songs, edited down others, to get the best out of them in the live environment. And some of them have really revealed a lot of new life that I never knew existed. And so I started looking at them in a different way. I enjoy playing them live and I have to say that wasn't always the case. I found a new way into that."