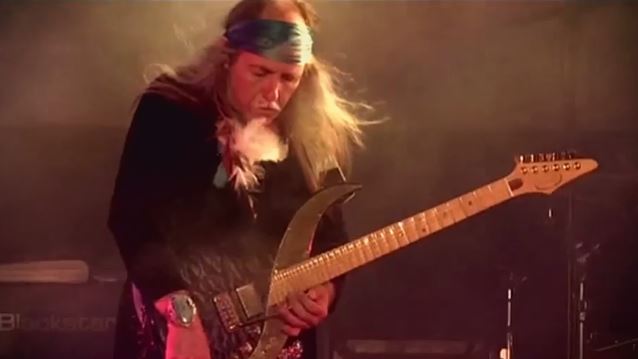 Legendary guitarist Uli Jon Roth (SCORPIONS) will release a new double album, "Scorpions Revisited - Volume 1", in the fall. Uli states: "The material we recorded for this project will be released in two stages, beginning with a double CD, which was recorded last year in the same hall near Hanover that we used for the SCORPIONS rehearsals 1973-1978. Together with an amazing bunch of very talented young musicians, I revisited my personal favourites from the early SCORPIONS period, some of which were written in that same hall. It was an emotional few days and I am very pleased with the results in more ways than one."

He continues: "The idea was to stay truthful to the original spirit of the music, while also putting a new slant on it whenever it felt like the right thing to do. I feel we succeeded in this. It was a intense journey into the past and I think we really managed to bring the songs back to life with a vengeance. They seem to have a timeless quality and it was easy to revisit this music and fill the old songs with new life. For me, personally, it was very inspirational and I hope that some of that translates towards you, dear friends. I really learned a lot from the whole experience."

The second release, which is scheduled for next spring, will be a Blu-ray, featuring live concert footage from Uli's "Scorpions Anniversary Tour" and "lots of other goodies."

A trailer for "Scorpions Revisited - Volume 1" is available below.

Roth was forced to pull out of the recent "Guitar Gods" tour alongside Yngwie Malmsteen, Ron "Bumblefoot" Thal (GUNS N' ROSES) and Gary Hoey due to visa issues.

Asked in a May 2013 interview with The Vinyl District if he had any regrets about his split with the SCORPIONS, Uli said: "I should have probably carried on doing the first American tour. I missed out on that, because my mind was on other things. I'm glad I did the Japanese tour, but I didn't want to do the American tour back then because I felt I really wanted to my own thing. Other than that, you know, they did their thing, I do my thing, it's very, very different, and it's a step I have never regretted, because it wasn't for me. I was in it for different reasons, and I got out of it for different reasons."

He added: "You see, for me, life is not just driven by material success. There was, of course, that with the SCORPIONS. I'm more interested in artistic success, and I had that with the SCORPIONS in the first few years, but then I felt that I wanted to go into a different direction, artistically. That was not possible because nobody would have understood that direction. It would not have fit."

Offering his take on the way music technology has progressed, Uli said: "I have mixed feelings. I embrace the digital technology, but I do see its weaknesses. In the beginning, compact discs were a huge novelty but they were 12-bit. Then they make them 16-bit. They are still 16-bit. So the stuff that we are producing in the studio sounds a lot better than what people are actually hearing. In fact, in recent years, thanks to Steve Jobs, and people like that, we've regressed to MP3s, which sound pretty horrible most of the time, compared to what we are hearing in the studio. Vinyl, of course, was a different animal altogether. There are certain sounds on vinyl that you just don’t get from any other medium, and I kind of do miss that sometimes. However, even vinyl had its shortcomings. I remember we were pressing these albums, and when you came to the center of the album you had to be careful with the levels, it started to distort. There were problems with phases, you had to be careful with the phases otherwise the needle would jump up. Then you had the half-hour scenario on each side, which we got kind of used to. We worked around that, that was kind of the format."

On the topic of iTunes, Uli said: "Oh, forget iTunes! To me, iTunes is a great idea to make money for the big corporations. It is not good for the musicians at all, it's the kiss of death for art as we know it. What it does, it turns music into something… it completely devalues music in the sense that it is just too easy to get, and it turns people into music junkies. There's just nothing special about it anymore, because nothing is being celebrated. You know? When you actually put on the cassette tape, or when you put on the needle, it's almost like some celebration. OK, now we are making a dedicated effort and it's like we are entering that room that only that album can present. With iTunes, most of the kids have no relationship with any of the artists, it's just, 'I like that song, I like that song.' It’s like going into a McDonald's shop. Basically, what it is, it's inflation galore. Less is sometimes more. I've seen people in love and in tune with iTunes. Some people seem to know how to work it and they are really good with it. Some people are music junkies anyway. They listen to music all day long. For these people, it's great. However, I'm not one of them. I listen to music rather rarely. When I do, it's always something special. I never have it going on in the background. It drives me nuts. I give it my full attention. Otherwise, it just drives me nuts. It asks for my full attention."