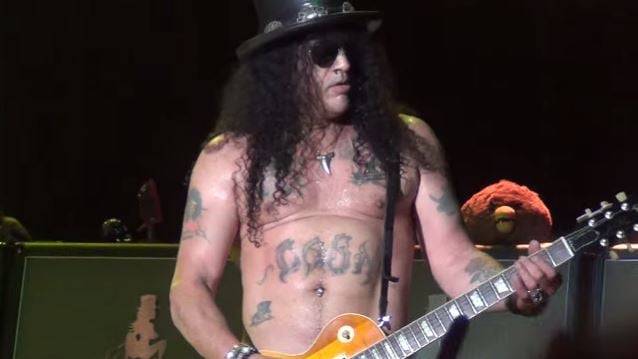 Fan-filmed video footage of Slash and his backing band, MYLES KENNEDY & THE CONSPIRATORS, performing on August 13 at the Fillmore in San Francisco California can be seen below.

"World On Fire", the third album to be made available under the Slash solo banner, will be released on September 15 via Slash's own label Dik Hayd International distributed through Roadrunner Records (Europe, Middle East, Africa and Latin America). A total of 17 songs, including one instrumental, were laid down for the follow-up to 2012's "Apocalyptic Love" with producer Michael "Elvis" Baskette (ALTER BRIDGE, FALLING IN REVERSE, INCUBUS).

Slash and AEROSMITH have teamed up for a U.S. tour this summer.