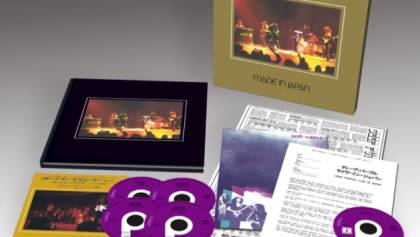 DEEP PURPLE: Deluxe Edition Of Seminal Live Album 'Made In Japan' Due In May

Universal Music has announced the deluxe release of DEEP PURPLE's seminal live album "Made In Japan" in multiple formats on May 19.

Together with LED ZEPPELIN and BLACK SABBATH, DEEP PURPLE has been referred to as the "unholy trinity of British hard rock and heavy metal" in the early to mid-Seventies. One of the most influential and important guitar bands in history, they have sold over 100 million albums worldwide.

"Made In Japan" was recorded live over three nights during August 15–17, 1972 at Festival Hall, Osaka and Budokan, Tokyo. Four of the tracks come from the band's 1972 "Machine Head" album. It featured what many consider the classic DEEP PURPLE lineup — Ian Gillan (vocals),Ritchie Blackmore (guitar),Roger Glover (bass),Jon Lord (organ) and Ian Paice (drums). Originally recorded only for the Japanese market, the album has since become seen as one of DEEP PURPLE's seminal albums, and one of the greatest live albums of all time (A Rolling Stone magazine readers poll in 2012 voted "Made In Japan" as the sixth greatest live album of all time).

May 19, 2014 will see the album newly remastered and released in a number of special formats. The format options include previously unseen footage on DVD, bonus material and mixes, memorabilia and a hardback book.

The "Made In Japan" formats:

METALLICA drummer Lars Ulrich last year told writer Peter Makowski that he is working on getting his all-time favorite band, DEEP PURPLE, a long-overdue spot in the Rock And Roll Hall Of Fame. Asked why the creators of "Smoke On The Water" were not in there yet, Ulrich said, "What you've got to understand is that a lot of the people that have run the selection process are critics, and DEEP PURPLE, as you know, were never a critic's band — especially in America, because their influence was probably felt more in Europe."

But Ulrich added, "It's only a matter of time. Rather sooner than later. We've already lost one member. The fact that LED ZEPPELIN and BLACK SABBATH are in and PURPLE is not is one of the crimes of that whole institution. We'll get them in soon enough. I'm working on it."

Founding PURPLE keyboardist Jon Lord passed away in July 2012. Ulrich, who wrote a tribute to Lord on METALLICA's web site, told Makowski, "I'm not sure that the people in today's hard rock world really truly understand how innovative this guy was . . . he really did something nobody had done before with the sound of the keyboards and I think that's probably the biggest thing to remember him for."

At their own induction in 2009, METALLICA's James Hetfield included PURPLE on a list of acts they wanted to see in the Hall. "We're somewhat of a heavy band and we have a small list that we'd like to also put some nods out and maybe plant a little seed, it's a band called DEEP PURPLE, THIN LIZZY, RUSH, KISS, TED NUGENT, IRON MAIDEN, JUDAS PRIEST, MOTÖRHEAD... who we would love to invite through the door now."

DEEP PURPLE was denied entry to the Rock And Roll Hall Of Fame in 2013 — losing out to such artists as American pop singer-songwriter Randy Newman and R&B singer Donna Summer.

The members of PURPLE, who released a new album titled "Now What?!" on April 30, 2013 in North America via earMUSIC, say it is no big loss.

"I fought against, all my life, becoming institutionalized. So it really does not affect me," singer Ian Gillan told Noisecreep. "But on the other hand, my family and friends and everyone that has stuck with us all these years, it means something to them. They love that recognition.

"To analyze it, and I'll try not to sound cocky or anything, I will say it as respectfully as I can, it's sort of like the Oscars and Grammys and the other awards like that — in the States, just like it is in England, and other places — these awards and honors are usually not decided by the fans, but by a cartel of influential people. These are the same people that decided THE MONKEES were America's answer to THE BEATLES. [laughs]

"So I'm not too concerned about it. Maybe it will happen one day, bit if not, my diary is full and I'm very happy. It hasn't affected our career but it does concern the fans — that's who I feel for." 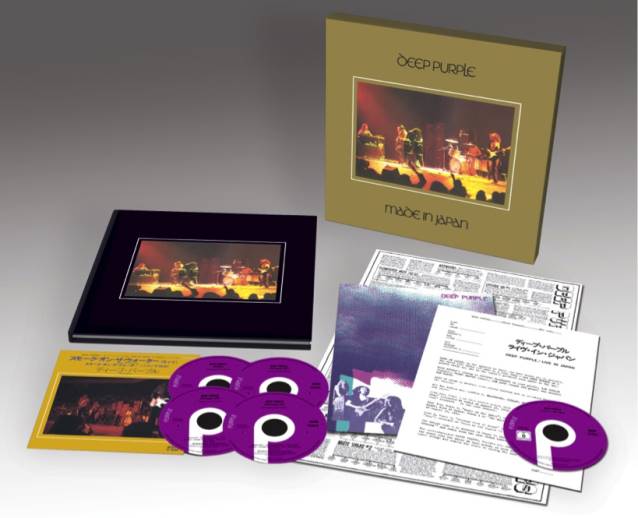