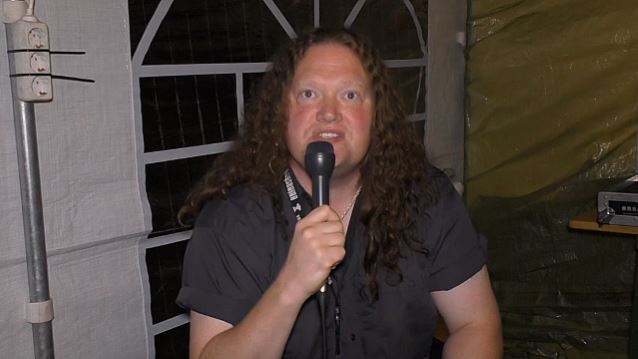 An hour before UNLEASHED's headlining appearance at Kaltenbach Open Air festival in Spital am Semmering, Austria in August, Stormbringer took aside the band's frontman Johnny Hedlund to throw some words and phrases at him. You can watch the exchange below.

Asked for his opinion of Facebook, Hedlund said: "Well, let's just say five years from now, it'll be called something different, in my opinion. I recall when everybody said, 'MySpace,' and I said, 'Well, two years from now, it's called something different,' and I think that's the same with Facebook. It's about to die. Young kids don't use it that much anymore, at least where I'm at. So we'll see. It's still working as a channel for contact and promotion and stuff like that. I don't use it as much privately. I don't have time to sit down and tell everybody when I'm taking a shit. It's just nice to read about bands and what's happening in the scene, but that's that for me."

UNLEASHED's twelfth full-length album, "Dawn Of The Nine", was released in April 2015 via Nuclear Blast. The follow-up to 2012's "Odalheim" was once again produced by the band's guitarist, Fredrik Folkare, at his Chrome Studios in Stockholm.