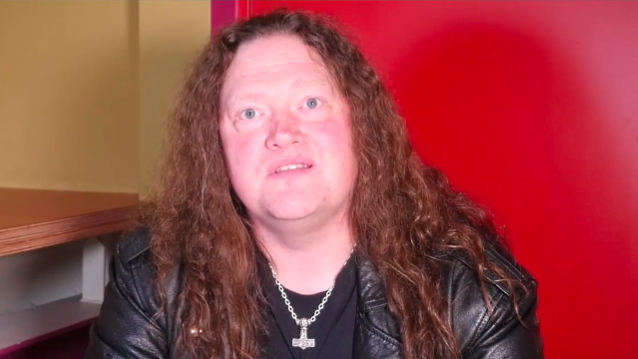 UNLEASHED frontman Johnny Hedlund has confirmed to France's Loud TV that he is working on a book about Viking traditions and values. "I can't expose a lot more about that right now, because it's a little too early, I'd say," he said (see video below). "But it's coming around. It's going well. Every time I go out, if I'm at an airport or on an aircraft or spend time wherever, I keep working on it. It's good fun."

He continued: "I don't think anybody has done a book like that, which is my understanding of the Viking traditions and values. That's what it is. We'll see what happens when it comes out. I'm really thrilled about doing it. I probably have more fun actually writing it than thinking about what it's gonna be like when it's done. I'm trying to have a good time doing it — creating."

According to Hedlund, his upcoming book won't be fiction "at all." He explained: "Without saying too much, it's about how to survive, in a way. It's about how to look into the future without getting depressed. It's about looking into the future, using the Viking tradition. So I'm combining these two things. So it's a lot of psychology, obviously, but it's a lot of hands-on things as well. It's a lot about how I live, how my family lives and how my friends live. I think it's got its place, and we'll see what people think about it once it's done."

He added: "The conventional view of the Vikings, it gets very commercial, it gets very easy and it gets a bit childish, in a way. And I don't think it was that childish, and I don't think it was that easy — I think it was harder than that, and I think there was more to it than that. So I think that's my task. That's what I do. It's what I try to bring forth. I think I try to do that for 30 years now. We'll see. Somebody else will have to be the judge if I do a good job or not."

UNLEASHED's 13th full-length album, "The Hunt For White Christ", was released in October 2018 via Napalm Records.