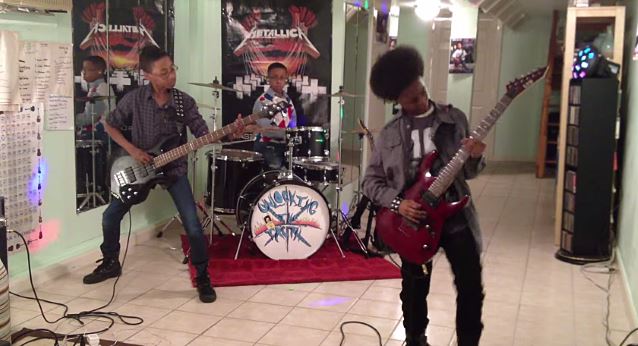 UNLOCKING THE TRUTH — the heavy metal band from Flatbush, Brooklyn made up of three African-American boys, guitarist Malcolm Brickhouse, bassist Alec Atkins and drummer Jarad Dawkins — spoke to The Daily Beast about their decision to sever ties with Sony, less than a year after signing with the major label.

"It was pretty difficult at times with [our] meetings [with Sony] — especially with this one particular lady at the label, who had a meeting with us once where she was just talking at us for six hours," Alec said. "We were pretty young at the time so we were pretty restless and wanted to get up and do something else, but she just had us in this meeting for six hours."

"There are so many different types of meetings," added Jarad. "Sometimes we have meetings at our lawyer's office, sometimes we have a meeting with a company. It depends on what the occasion is."

"It's been very difficult. We're speaking to our attorneys about leaving Sony, and it's very complicated," said Alec. "The album is ready, but because our attorneys are talking about us leaving the record label, it's going to be a whole process of getting our music back."

As part of its guaranteed two-album deal with Sony, UNLOCKING THE TRUTH was reportedly due to receive $60,000 to record the first disc and possibly as much as $325,000 for the second CD. Sony reportedly had an option to release a total of five albums from UNLOCKING THE TRUTH that could have pushed the label's financial investment to around $1.8 million ($325,000 for the second album, $400,000 for the third, $450,000 for the fourth and $550,000 for the fifth). It should be noted, however, that the band was only supposed to see the real money after an initial $60,000 advance if their debut album sold more than 250,000 copies, a prospect that seemed highly unlikely in an age of diminishing record sales.

Luke Meyer, the director of "Breaking A Monster", a documentary about the band's rise to success, told The Daily Beast: "The $1.8 million is what happens if you add up all their advances for five records, and it increases in amount with each successive album.

"That's what everyone says about the music industry — it's got all this glitter on it, but it's always less flashy than it looks."

The members of UNLOCKING THE TRUTH famously got permission from a New York judge last July to sign the Sony deal. The musicians needed the judge's approval because they are minors.

UNLOCKING THE TRUTH has already played the Coachella festival and has supported GUNS N' ROSES. In addition, the band has appeared in a national ad campaign for Verizon Wireless.

UNLOCKING THE TRUTH credits bands such as METALLICA, SLIPKNOT, DISTURBED, CHELSEA GRIN, MOTIONLESS IN WHITE and ESCAPE THE FATE as its influences.

"Breaking A Monster" is looking for distribution.