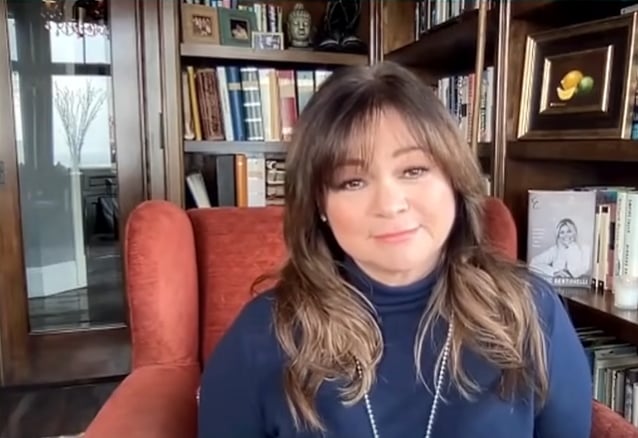 Eddie Van Halen's ex-wife Valerie Bertinelli discussed her new book, "Enough Already: Learning To Love The Way I Am Today", during a recent appearance on QFM96's "Torg & Elliott" radio show. Bertinelli reflected on the special relationship she had with her late ex-husband, saying they were still on good terms when they split two decades ago.

"I pull things apart very, very gently, or at least I try to," she said (as transcribed by BLABBERMOUTH.NET). "There was never a lawyer. We had a mediator. We still lived together when we finally said, 'We just need to move apart,' until I found a home. And Ed was the first person to look at the home I live in now to make sure that we both felt that it was close enough to his house that [our son] Wolfie would be safe, close enough to his school. We stayed amicable. And he was very angry at me for the first few years. But we always, always had that love for one another, and we came back to that, and that alone, in the last few years — thankfully. We always had a love and respect for one another."

Asked if Eddie's second wife, Janie Liszewski, is "jealous at all," considering that Valerie has written a book that covers her relationship with Van Halen and is doing interviews to promote it, including talking about their love and how she was present at the time of Eddie's passing after a years-long battle with cancer in October 2020, Bertinelli said: "Honestly, I don't know. I mean, she moved out a few years before Ed died, so he was alone [in his house for the last few years of his life]. I know that she still loved him as well, and she was there the day that Ed died. So they were still trying to stay close and be in each other's life. But, yeah, she didn't live there."

Bertinelli split with Van Halen in 2002 after 21 years of marriage. They officially divorced in 2007. Eddie then went on to marry Liszewski in 2009, while Valerie also remarried, tying the knot with Tom Vitale in 2011. Valerie told People magazine that both marriages were struggling before Eddie's death. She eventually filed for separation from Vitale in November 2021.

In "Enough Already: Learning To Love The Way I Am Today", Valerie writes about saying goodbye to Eddie when the legendary guitarist died from cancer. She and their son, Wolfgang, 30, were by his side in his final moments.

The following day, Janie, a ballroom dancer and a stuntwoman-turned-publicist who owns her own public relations agency High Profile Media, took to her social media to write: "My husband, my love, my Peep,