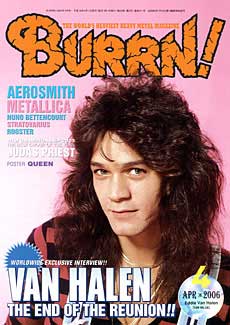 According to MelodicRock.com, the April 2006 issue of Japan's Burrn! magazine features Eddie Van Halen on the cover with the heading "The End Of The Reunion" (view cover image at this location). Inside is an exclusive new Michael Anthony interview conducted in February 2006 by the magazine's U.S. correspondent John "Shooter" Harrell. The interview with Michael is apparently a starkly honest and forthright conversation with the highly respected bass player. One of the statements from Anthony in this interview is the confirmation that he did not play bass on the three 2004 tracks — "It's About Time", "Up For Breakfast", and "Learning To See" — included on the band's greatest-hits album, "The Best Of Both Worlds". That is just one of many insights into the dysfunctional band that is revealed.