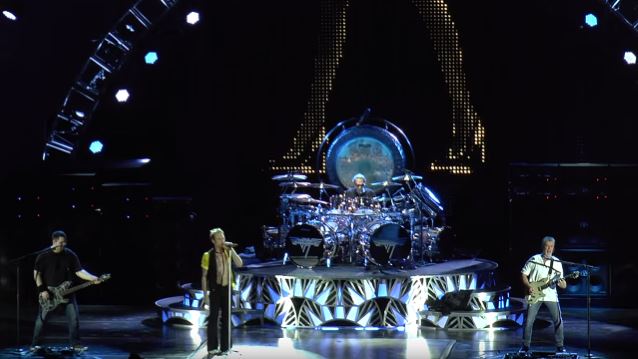 Fan-filmed video footage of the final show of VAN HALEN's U.S. tour, which took place on October 4 at the Hollywood Bowl in Los Angeles, California, can be seen below.

The trek was VAN HALEN's first since an aborted North American run three years ago in support of its then-new studio album, "A Different Kind Of Truth".

Out now is "Tokyo Dome In Concert", VAN HALEN's first-ever live collection featuring singer David Lee Roth, despite numerous pro-shot concerts from the band's original heyday being heavily booted for years — including film and videotaped-sourced shows from 1981 in Oakland, California; 1982 in Largo, Maryland; 1983 in San Paulo, Brazil and the US Festival in San Bernadino, California; and 1984 in Leicestershire, England — among others.

VAN HALEN bassist Wolfgang Van Halen told The Pulse Of Radio that his dad Eddie handed down some key tricks of the trade when playing live. "He definitely has some quirky lines he gives me that definitely help me out, like, in terms of playing music, 'If you ever make a mistake, do it twice so the audience thinks you meant to do it,'" he said.