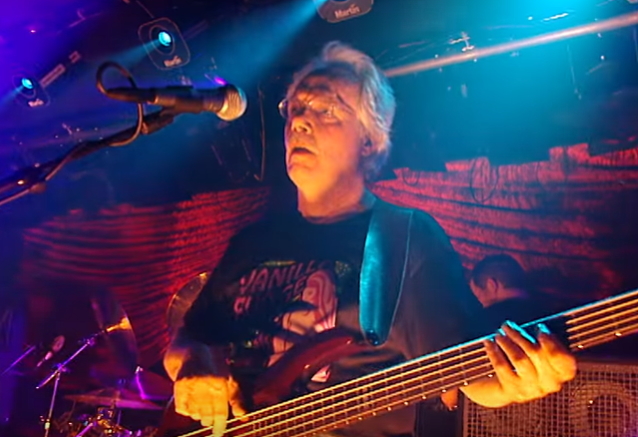 The news of Bogert's passing was confirmed by his longtime bandmate, drummer Carmine Appice, who wrote on Facebook: "My true friend Tim Bogert died today. He was like a brother to me. He was my friend for over 50 years.

"Tim was a one of a kind bass player. He inspired many, many bass players worldwide. He was as masterful at shredding as he was holding down a groove, and Tim introduced a new level of virtuosity into rock bass playing. No one played like Tim. He created bass solos that drove audiences to a frenzy every time he played one. And he played a different solo every night. He was the last of the legendary 60s bass players.

"Tim was a very intelligent person. So intelligent that we would call him 'Spock'. You could ask him anything and he would know something about it.

"I loved Tim like a brother. He will be missed very much in my life. I will miss calling him, cracking jokes together, talking music and remembering the great times we had together, and how we created kick-ass music together.

"Perhaps the only good thing about knowing someone close to you is suffering a serious illness, is you have an opportunity to tell them that you love them, and why you love them. I did that, a lot. I was touched to hear it said back to me. Nothing was left unsaid between us and I’m grateful for that. I highly recommend it.

"Rest in peace, my partner. I love you. See you on the other side."

Bogert played on VANILLA FUDGE's first five albums between 1967 and 1969 — "Vanilla Fudge", "The Beat Goes On", "Renaissance", "Near The Beginning" and "Rock & Roll" — before the group disbanded in 1970. Soon after, Bogert and Appice teamed up with guitarist Jim McCarty and vocalist Rusty Day to form CACTUS. In 1972, CACTUS split, and Bogert and Appice joined forces with guitarist Jeff Beck to form the power trio BECK, BOGERT & APPICE.

In 1999, Bogert was inducted into the Hollywood Rock Walk Of Fame.

Billy Sheehan said in Bass Player magazine that "Tim was my biggest influence. He's also one of the first and best in many categories. The first VANILLA FUDGE album was one of the biggest bass breakthroughs of all time."

He was like a brother to me. He was my friend for over 50 years.

RIP TIM BOGERT. I first saw Vanilla Fudge on a bill with the Yardbirds with Jimmy Page. Spectacular. I’d never heard 4 people play & sing as one. Tim was mind boggling on all fronts. Also when I saw Beck, Bogert&Appice. A powerhouse. https://t.co/fA1gjE9jgL

Tim Bogert—Grand Master. I love you, Tim. Thank you for your awesomeness, generosity, and kindness. I hope we meet again, my friend. Rest In Peace. pic.twitter.com/PopNKwJJ07

“I saw the Fudge many times in that era and BB&A and BOC toured together. A great player and a great guy, Rest In Peace Tim Bogert.”
-EB pic.twitter.com/ZxZ1OGpIa8

Rest in Peace to Tim Bogert, one of the world's greatest rock bass players.

So sorry to hear of the passing of bass legend Tim Bogert. One of the true pioneers of the instrument in the late 60’s/early 70’s with his work with Vanilla Fudge, Cactus and Beck Bogert Appice #RIPTimBogertpic.twitter.com/lptVZHnbqN

I posted this photo last week in memory of EVH. Just got word that Tim Bogert has passed away. I wore the grooves out to my copy of Beck Bogert & Appice as a teen. Jamming with him and Ed was incredible and surreal. @eddievanhalen@WolfVanHalen@VanHalenpic.twitter.com/cSEtKZ1wv3

Rest peacefully Tim Bogert. One of the greats. 🙏🏻🌟

I am deeply saddened by the passing of my first bass hero, Tim Bogert. My condolences to his band mates @carmineappice1 Mark Stein, his family and friends. Rest In Peace, Tim. pic.twitter.com/k9FQI7R7mZ

We lost a true bass pioneer today. He influenced so many including my biggest heroes. He was my teacher and mentor when I first moved to the US. Rest In Peace Tim Bogert and thank you for everything. https://t.co/1ABRO5O3qC

RIP to one of the most innovative and bad ass bassists to walk the planet... Tim Bogert of Vanilla Fudge, Beck/Bogert/Appice and Cactus. Cactus was a band Blitz & Menghi bonded over hence us covering their rendition of “Evil” on our “American Made” record. pic.twitter.com/cpDxJznpeA