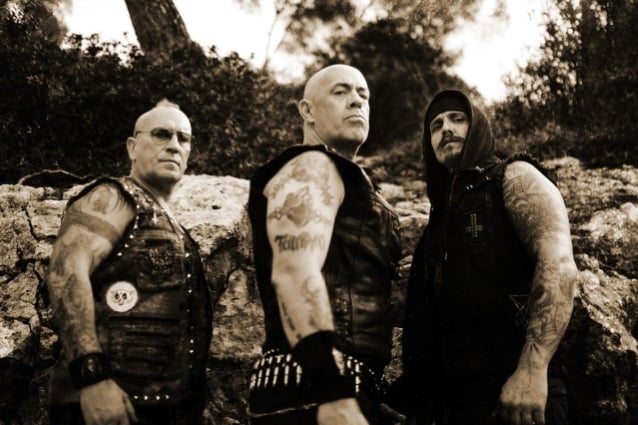 "It is with great pleasure that the triumvirate returns to North America 'In Nomine Satanas', with our great friends EXMORTUS and HOMEWRECKER for some exclusive limited dates," commented Dolan. "We are proud to also feature in this 2019 part one our show with the original almighty MISFITS at the Chicago Allstate Arena. The heavens are most certainly on fire!!! Avé!"

Last year, VENOM INC. recruitedJeramie Kling of the Tampa-based melodic death metal band THE ABSENCE to fill in for drummer Anthony "Abaddon" Bray on a European tour while Abaddon stayed home to spend time with his newborn daughter. VENOM INC. has since completed several tours with Kling without making any official announcements about Bray's possible return to the group.

Asked by "Rock Talk With Mitch Lafon" whether Kling is merely filling in for Abaddon or if Jeramie is the permanent new drummer for VENOM INC., Dolan said: "Well, the whole idea of putting this together — the VENOM INC. thing — was for the fans and to play the legacy. There was never an intention to make an album or to go down that route; it was purely to play live shows and reach the places that Cronos or VENOM had never been to before, play clubs as well as anything else that came along — not discriminating between sizes of venues, but get to the fans, get to the proximity of the fans. And I wanted to play the whole catalog — all the songs nobody had ever heard before, B-sides, you name it. That was really, really good, but I think once we then got offered to do an album and then we signed with Nuclear Blast, things got a bit more legitimate, more real. And, of course, when reality hits in that way, it becomes about money and ego and all of that. And I guess, naïvely, because I just wanna play rock and roll and I just wanna be in there playing all the time — I'm not too worried about the pay deals and the dealings and all of that. Although I do all the business management for us, it's not my focus — my focus is the fans and the music; that's it. That's why I'm there. I'm not there for the five-star hotels and whether I've got a jacuzzi; I'm there to play shows every night and enjoy myself and have the fans enjoy themselves. So the politics started to outweight the product and I pulled back from that. And there was a lot of discontentment."

He continued: "Abaddon, then, was having a baby, wanted to take a month out. We had a European tour to fulfill; I guess he wanted to cancel it and put it further back into the year. The label was pressuring us because we had taken over six months before we had done the European tour to support the album. The management said, 'We can't push it back, because we're gonna go to America.' So the logistics meant we had to do it. He agreed that we could use a [substitute]. And Mr. Kling had just done our U.S. tour as our soundman, but also he's a drummer and a very good one, for THE ABSENCE, and he knew the material. So I thought, 'Well, if we're gonna use a [fill-in] while Abaddon sits out for the month of March, then we should get Jeramie.' We did have offers from drummers, we could have gotten somebody else, but I thought we'd take Jeramie. He's not as much of a platform personality as some other drummers, like Mr. [Nicholas] Barker or Rik Charron, ex-EXCITER, or people like that. I thought he's a technician, he was working with us, he's got his own band, he's launching his own album, so people will know automatically he's only there to fill in until Abaddon comes back. However, that month that we were waiting for Abaddon to come back, things went all a bit strange, let's say, and all a bit wonky. And then I still assumed he would be coming back after March, [but] he didn't. We then had to fulfull some other shows, he still wasn't back, and it seems discontentment has set in and he wants to do his own thing now. So, I don't know."

Dolan added: "In the future, who knows what's gonna happen? But I wanted to continue playing. We have a good album; we wanted to keep promoting it. We had show offers — so many things have been coming up. And I thought, well, I can't stop the car while we're on the road. We wanna get the new album done, we wanna keep playing shows. If [Abaddon] runs alongside and he comes back on, then that's what he does. If he doesn't, then we'll continue with Jeramie until such times as we don't. But the advantage of Jeramie, I think, is he knows the material, he knows how it should sound, he knows how it should be played. His style is very different to what we're doing in VENOM, but he's adapted himself. He's very well studied — he studied all the Abaddon tapes, all of the music, all the original recordings — and he plays to a click track from the original recordings, so he plays them as they're meant to sound." 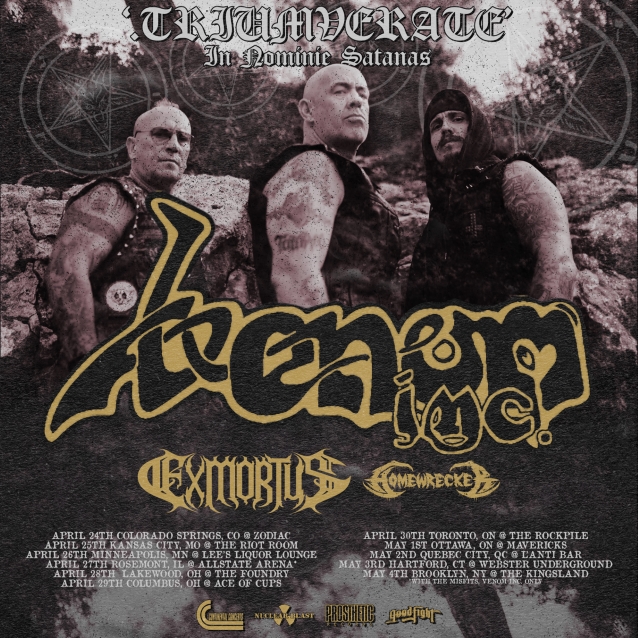