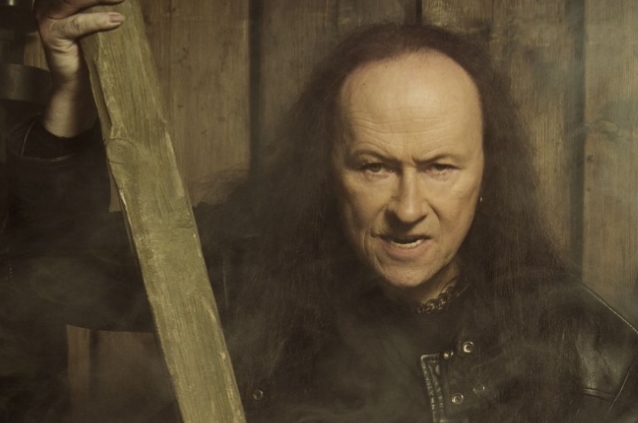 VENOM's CRONOS Has Had No Contact With MANTAS Following Guitarist's Heart Attack: 'I Didn't Feel The Need To'

VENOM frontman Conrad "Cronos" Lant says that he has had no contact with the band's former guitarist Jeffrey "Mantas" Dunn after the latter underwent a successful emergency open-heart surgery in May. "We don't speak," Cronos told Loudwire. "I've had tragedies and things and we've lost crew and he didn't turn up for funerals or anything either, so [it's] best just not have anything to do with each other, really. I didn't feel the need to. If he's gonna be absent for things like that, well, then I take the hint… He lost real contact with me back in 1986 when he just completely changed his personality… But, I mean, he was the guy who just sat in the hotel room and everybody got on with it anyway. He was never a real big influence on VENOM as much; he just played the guitar and went home. He's a very private person and I'm sure that's just the way he likes to go.'

Cronos added: "To tell you the truth, I wouldn't know where to contact him anyway. I haven't got a clue. I don't know what label they're on or what they're doing. So, no."

Mantas, who is now a member of VENOM INC. alongside former VENOM frontman Tony Dolan, told DCHeavyMetal.com in a 2017 interview that he had "absolutely no contact" with Cronos. "The bridges are firmly burnt," he said.

According to Mantas, there have been no legal challenges to VENOM INC.'s continued recording and touring activities despite the similarities in the two bands' names. "Yes, we did receive a couple of lawyers' letters at the beginning and I responded to both of them and we haven't heard anything since," the guitarist said.

In a 2016 interview with Westword, Mantas said that Cronos "changed completely" when "the success of VENOM hit." He added: "There was a massive shift in personality. Both times that I've walked away from VENOM, it hasn't been because of musical differences or finances or anything like that — it was just because it's too difficult. I can't put up with that stuff, where you don't know what his personality's going to be from one day to the next. There's never been a massive camaraderie between the three original members."

Mantas also shot down the possibility of a reunion with his one-time bandmate, saying: "Cronos is doing what he does. The last few interviews I've seen, all he does is attack us in the press and call us names, and he's got his little minions, his guitarist, calling us a pale imitation, and it's like, actually, you're playing my parts and [drummer] Abaddon's parts. So who's the fucking tribute band around here?"