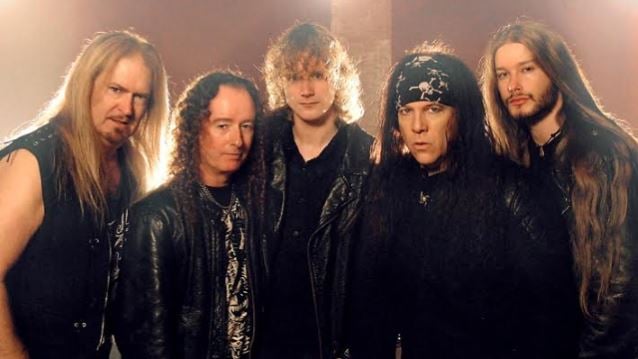 San Francisco Bay Area metallers VICIOUS RUMORS have set "Concussion Protocol" as the title of their twelfth studio album, due at the end of August via SPV/Steamhammer. The CD features eleven brand new songs and tells a chilling story of an armageddon by a global killer asteroid and how humanity unravels in the wake of the news. It's the first concept album for the band.

"Concussion Protocol" was produced by VICIOUS RUMORS guitarist Geoff Thorpe and longtime co-producer and engineer Juan Urteaga at Trident studios (MACHINE HEAD, TESTAMENT, HEATHEN, EXODUS, DRAGONLORD) in Pacheco, California. A video for the first single "Take It Or Leave It" was filmed a couple of months ago and will make its online debut soon. Guest solos by VICIOUS RUMORS brothers from the band's rich history, Brad Gillis (NIGHT RANGER, OZZY OSBOURNE) and Steve Smyth (NEVERMORE, TESTAMENT, FORBIDDEN) only add to the madness.

Thorpe states: "The album is relentless and crushing in true, classic VICIOUS RUMORS style but with many twists and turns. Believe me, you're in for a treat, VRazors!!! If you've ever been a fan of VICIOUS RUMORS, SABBATH, PRIEST or MAIDEN and a little Bay Area-style thrash thrown in for good measure, then this album is definitely for you!!! Everything you love about VICIOUS RUMORS is present throughout the whole album!!"

VICIOUS RUMORS 2016 lineup (from left to right in photo):