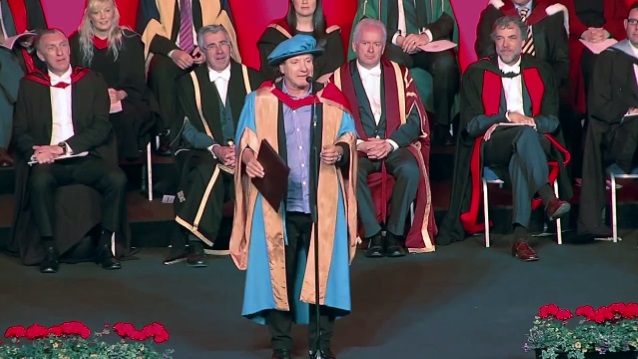 The honorary degree recognizes the significant contribution he has made to the music industry as lead singer of one of the world's most successful rock bands for the past three decades.

The singer with one of the rock world's most instantly recognizable voices was born along the river from the University at Dunston and performed with a series of bands before finding Top 20 success with GEORDIE during the glam rock era of the 1970s.

Brian joined AC/DC in 1980 as lead vocalist and his first album with the group, "Back in Black", is one of the most successful albums of all time, selling over 22 million copies in the U.S. alone.

AC/DC has sold an estimated 200 million albums worldwide and the band's most recent tour, "Black Ice", is claimed to be the fourth highest-grossing concert tour of all time.

AC/DC's enduring excellence was recognized last year by The Recording Academy, when they inducted the group's 1980's hit "Back In Black" into the Grammy Hall Of Fame, taking its place alongside recordings that have inspired and influenced fans and music makers for generations.

One of Brian's heroes is WO Bentley, founder of the eponymous motor company whose vision was "to build a fast car, a good car, the best in its class." As a self-styled "incurable, certifiable petrolhead," Brian shares the same appreciation of and passion for excellent design and engineering, and so he received his degree alongside students from Northumbria's Engineering and Environment programs.

Professor Andrew Wathey, Vice-Chancellor and Chief Executive of Northumbria University, said: "It is fitting that we honour one of the most distinctive voices in rock music, who is also a native of the North East.

"Northumbria University has a strong tradition of partnership working in the region's cultural and creative sectors, and our Students' Union has long been a focus for key bands who have gone on to achieve worldwide success.

"It is interesting to reflect on the importance of culture to collective life of the North East and of the cultural industries as a major U.K. export: Brian Johnson symbolizes both of these things and, moreover, has been an inspiration to generations of young musicians over several decades."

Brian has maintained his thick Geordie accent despite splitting his time between Florida, where he has had a home for the last 35 years, and London.

AC/DC confirmed widespread reports in April that the band's guitarist, Malcolm Young was stepping down due to an undisclosed illness, with some outlets reporting that he suffered a stroke.

The legendary Australian act stated that it will "continue to make music," and began recording sessions with producer Brendan O'Brien in May. In addition, the band was previously expected to celebrate its 40th anniversary this year by playing 40 shows in selected cities around the world, which have not yet been announced.

An interview with Johnson as well as footage of his graduation speech at yesterday's event can be seen below.